One of my friends who I used to teach in Young Women's is home for the semester, so she and a couple of other guys from the ward have been coming over and playing Sunday night games again. That is fun. She decided to go on a mission and she is going to Tempe, AZ. I love it down there. I am excited for her, although I will miss her. She's kind of like a little sister to me.

On Monday night we had a girls night and it was fun. We played games for most of it this time. The rest of the week was pretty much same old same old. I was a little more lazy in my preschool this week. I need to get back on track next week. It's hard to be awesome all the time. Ha!

Scott went to Texas this week. I had Katrina come over that night to hang out with me and so I could practice braiding on her hair. I need to learn some skills and my girls have far too little to practice on at this point. Hopefully some day I can fix it cute.

On Friday night we had ward temple night. The temple was so busy it was insane! I couldn't believe it. I think it's a popular date night thing to do. Seesh! It was craziness I tell you. Our ward's 6:30 session time got pushed back to 7:00 so a big group of us did sealings. It was pretty cool to do a sealing session with 10 other couples from our ward. Afterwards we went and had rootbeer floats at a ward members house.

On Saturday I worked really hard all day and finally stopped working and did almost nothing after 6:00. I was pretty exhausted by that point. I get to go visit my friends Scot and Jenny in Colorado next week. I am very excited. I can't wait! I love them. Jenny was my roommate for years and Scot dated Jenny for years so the three of us hung out a lot. I think we will be doing some serious crafting and television watching which is some of our favorite things to do.

Other than that I can't wait for February because we have been out of grocery money for 3 weeks. Luckily I stock up so we have been fine but really I can't wait. I hate not being able to go to the grocery store. I am feeling a need for some new recipes and some serious fresh fruit and veggies. I just need to figure out some sort of meals to throw into the freezer so my family can eat something while I am gone. Desperate times I tell you! 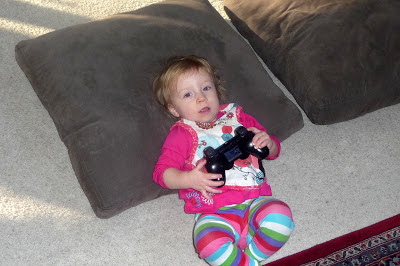 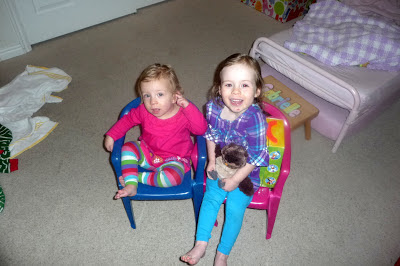 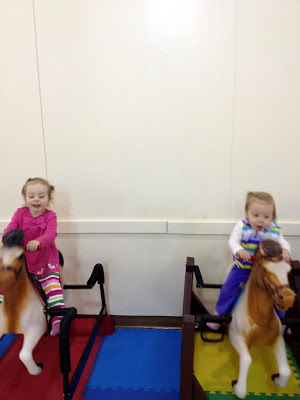 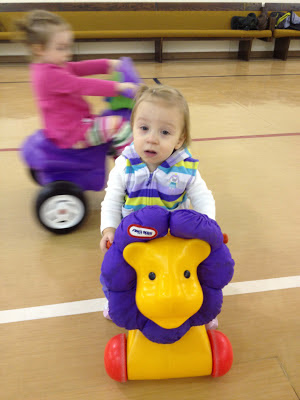 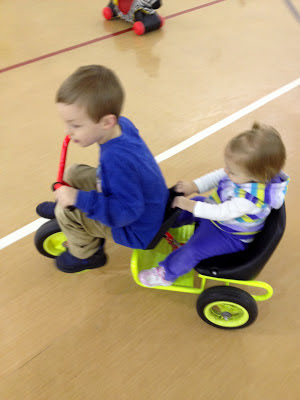 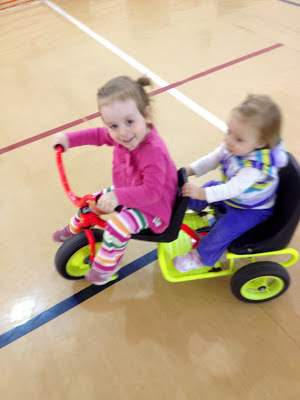 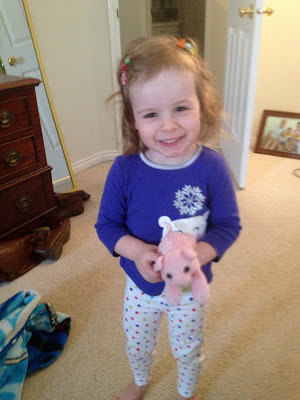 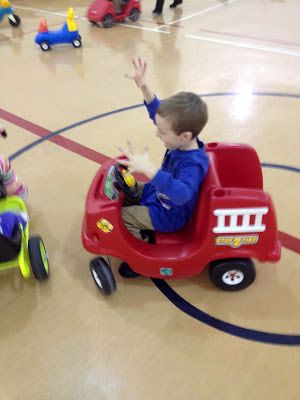 Baby it's Cold Outside

This is the coldest winter in Boise we've ever experienced. I feel like I'm in Arco, but I know I'm not because if it's this cold in Boise I know it's much colder in Arco and it is. My mom said that last week it was -20 and it was blowing. She thought they were going to cancel church but they didn't. Our lows have been in the single digits around here with highs in the teens.

I've been doing lots of preschool activities with the kids. I feel an urgency to teach Corbin especially as much as he and I can stand. I feel like Kindergarten is going to be here in a blink of an eye. I want him to be at least where he needs to be but preferably ahead. Corbin doesn't love it and I have to make him color or write his name, etc whereas Gabby loves doing it. She wants to go over her flashcards everyday. She almost knows all of her numbers up to 12. I'm trying to look at everyday things as learning activities. Corbin helped me make sugar cookies and I thought that cutting out the shapes was a great art activity and dying the frosting was a great science lesson. Eating it is a good health lesson (on what not to eat). Ha. Anyway I'm trying to do better and be better in this aspect. It is a learning process for sure. I have a long way to go but I have made some progress in this area.

On Wednesday Corbin wanted to go on a walk with me. He had mentioned it the day before so I knew he wanted to. Scott was home so I put the girls down for a nap and he and I went on a winter adventure. It was about 20 degrees. Brrr. I don't like the cold. It was fun though we went on a mile walk with a pit stop at the park where Corbin played with the ice chunks. When we got home he jumped in the bath and I had some hot chocolate. Like I said, brrr, It was cute though. I don't want my adorable boy to grow up. I just love him!

I got an idea in my head about redecorating my kids' room and now I really want to. The problem is we are completely out of money this month so I can't even get started. The other problem is we need to get bunk beds which will be expensive for us. I have been looking on Craigslist and the thrift stores. Scott may make them. We will see. I hate waiting for things! AHHH! Anyway it will be a long process and that is life, but someday in the next few months I hope to be all finished. We will see, this bunk bed situation...hmmm. 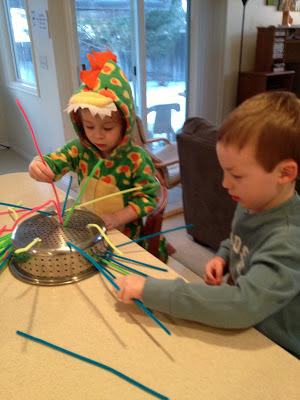 
We have lived in Boise for 5 years and this is the first Boise winter that actually feels and looks like winter to me. They even had a snow day last week for several inches of snow. Although when Scott talked to his dad in Salt Lake he had been shoveling snow for the last 5 hours. They had received 18 inches of snow and school wasn't canceled down there. That's pretty hilarious to me. I think it snowed one day last winter. It snowed a lot but by the end of the day it was already melting and it was competently gone the next day. So it's been kind of nice to have the snow stick around. It's so much prettier that way. I am already looking forward to spring however. Loading my kids up in their coats is super duper annoying to me.

One day when it was beautifully snowing I said to my kids, "look at the snow, it's so beautiful." Which Corbin responded back "you go play in it." Ha. Turns out neither of us wanted to go play in the snow. My kids won't play in the snow unless I play with them and I don't want to. One day it was pretty mild outside and the snow was perfect for snowman building so I forced myself to go out with the kids and build a snowman. I find that with parenting you have to do a lot of things you don't want to do and it's good for you. It really teaches you to gird up your loins and suck it up if you will.

Scott got called as the Elder's Quorum President. I think I may have underestimated how much time this would take. He was the first counselor for years so I thought I had a pretty good idea. I was wrong. Being the President takes up a lot more time. This will be a bit of an adjustment for sure.

The indoor park finally opened up at the Boise Friends church. It's about time. They used to open up a few days a week for a few hours from November until March. This year they didn't open up until last week. I have missed them. I'm sad they have seriously cut back on how long they stay open. We were all happy to go and play and we will be going there at least  once a week I'm sure.

On Friday Scott went on the Elders Quorum overnight camp out. One of the "widows" invited me over for dinner along with another "widow." We had fun and the food was fantastic. On Saturday we went to a birthday party at PoJos. My kids had so much fun, especially Corbin. I wasn't sure how it would go having all three kids by myself at PoJos for 2 hours, but it went well. I have found that when Gabby is a in a happy and independent mood it makes ALL the difference. Scott got home around 4:00 Saturday afternoon.

Corbin gave a talk today in church and he did a GREAT job. We have been working on his talk all week. I'm so glad it's done. I made him memorize it. We practiced it 10 times everyday and yesterday we practiced 20 times. This is a lot for a 5 year old, but he did it. I'm so glad I had a weeks notice so we could prepare. I hate when they only give me a day. I think it's really good learning opportunity. I think it teaches that we spend time preparing for our talks. I also think it's a great excuse to learn to memorize which is a great skill. I'm glad it's done though because it was pretty annoying to execute.

I decided very last minute to throw a New Year's Eve party. I had been thinking about it a little bit and told my friend. She called me on Sunday night and asked me if I was doing it and I decided to do it. I sent out a message to some friends on facebook. 2 couples came along and my friend Lisa who came alone. It was actually a perfect number of people to play games and that's what we did all night. It was a blast. We started out eating food and playing an enpromto game of "name that song" from Scott's super old school Rockin' New Year's Eve playlist. We had prizes of leftover wedding candy. After that we played group Pictionary on Corbin's big drawing easel. Then a round of catch phrase. We finished out the night playing several hours of Tripoly. It was a great time and I'm glad there were a few people without plans that came on over. I spent all day making decorations because I am a bit of spaz and when I get on a kick with something I can't get enough.

New Year's Day was pretty lazy. Most of us were still in our pajamas at 1:00. Scott and I watched an episode of Firefly in the middle of the day. That's what made it feel like a holiday the most. That night we just snagged a pizza from Little Caesars.

The rest of the week I have been trying to get everyone back on track and on routine. I am definitely still in staying up late, sleeping in late, and eating junk food mode. I think things will be much more on track next week. My major goals right now are with my kids. I really want to put a lot of focus on Corbin's preschool work. I also need to continue to work with and encourage Piper to walk and talk as she is doing neither. 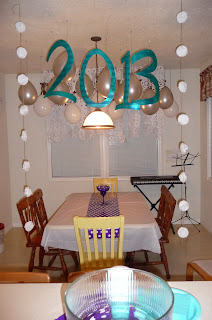 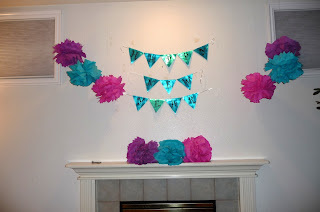 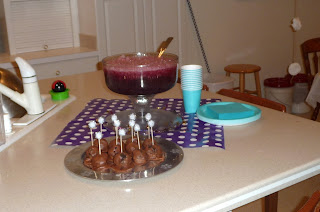 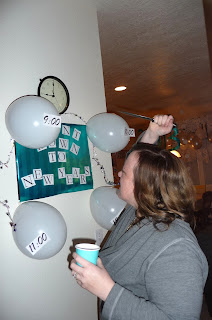 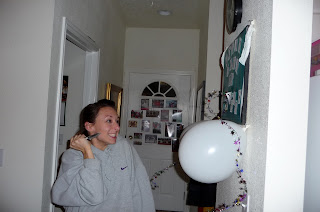 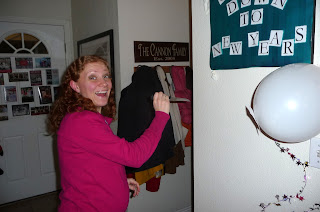 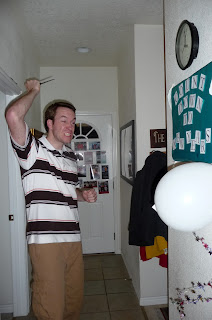 Per Aunt Carole's request we made a video of Gabby singing the song "Master the Tempest is Raging." It's pretty precious.

Look at the blog post below to watch a slideshow of Corbin's first 5 years.