This week I painted my front entry way and the hall. It wasn't very much but man it was so exhausting for some reason. I worked on the baseboards and doors for a few days and I taped for a few days and I painted the walls for a few days. This week my old Laurel and friend got back from her mission and she and her sister came over on Friday and helped me paint for a bit. I decided to paint the inside of my outside door so it was outside most of the day. That made for a day filled with lots of flies and escaping babies. The door took 4 adults and an hour and a half to go back on. Who knew it would be so difficult? I strained my neck pulling down tape off the ceiling and I've been in tons of pain all day. I wasn't sure if I was going to be able to go to church because if I moved wrong I would yell out loud. Ha. Luckily with some additional pain meds I was able to get the pain more under control so that when I moved wrong I could let out a silent wince of pain.

I had to go to church today though because it was the primary program, only the best sacrament meeting of the year. Gabby had a big part that she totally had memorized but was bawling and refusing to do in practice last week. I talked to her a lot about it this week and I even took her to the church and had her practice her talk in the microphone several times. Luckily I think the reward of a toy at family dollar was enough to make her decide to be brave. Gabby was the one that had to make that decision mind you. If she hadn't there is no way she would have done it. The cutest part was that Corbin held her hand and walked her up to the stand and when it was her turn to do her part he went over and grabbed her and walked her to the front. He is a sweetheart. Love him. Corbin did GREAT on his part too. He spoke very clearly which is not always the case. Gabby needed a little prompting from the leader but she mostly did it on her own. I was just so proud of her for being brave and doing it.

So my friend Katrina is back and all is right with the world. She came over after our kids went to bed and wrote in her journal while Scott and I went on a little date. We went to Home Depot. I really do love that store, so many possibilities. Anyway we looked at carpet samples for fun for our "some day" plans. Then we went to DQ and shared a burger and blizzard. It was so fun. So glad Katrina is back. She is always willing to come watch a movie while we escape for a while.

On Thursday I got to go with Corbin's class on a field trip. It was some FFA something or another. They had tractors and animals and things like that. I'm hoping that after Scott's schedule gets a little more figured out that I will be able to sneak away once a week and volunteer in Corbin's classroom. Fingers crossed. 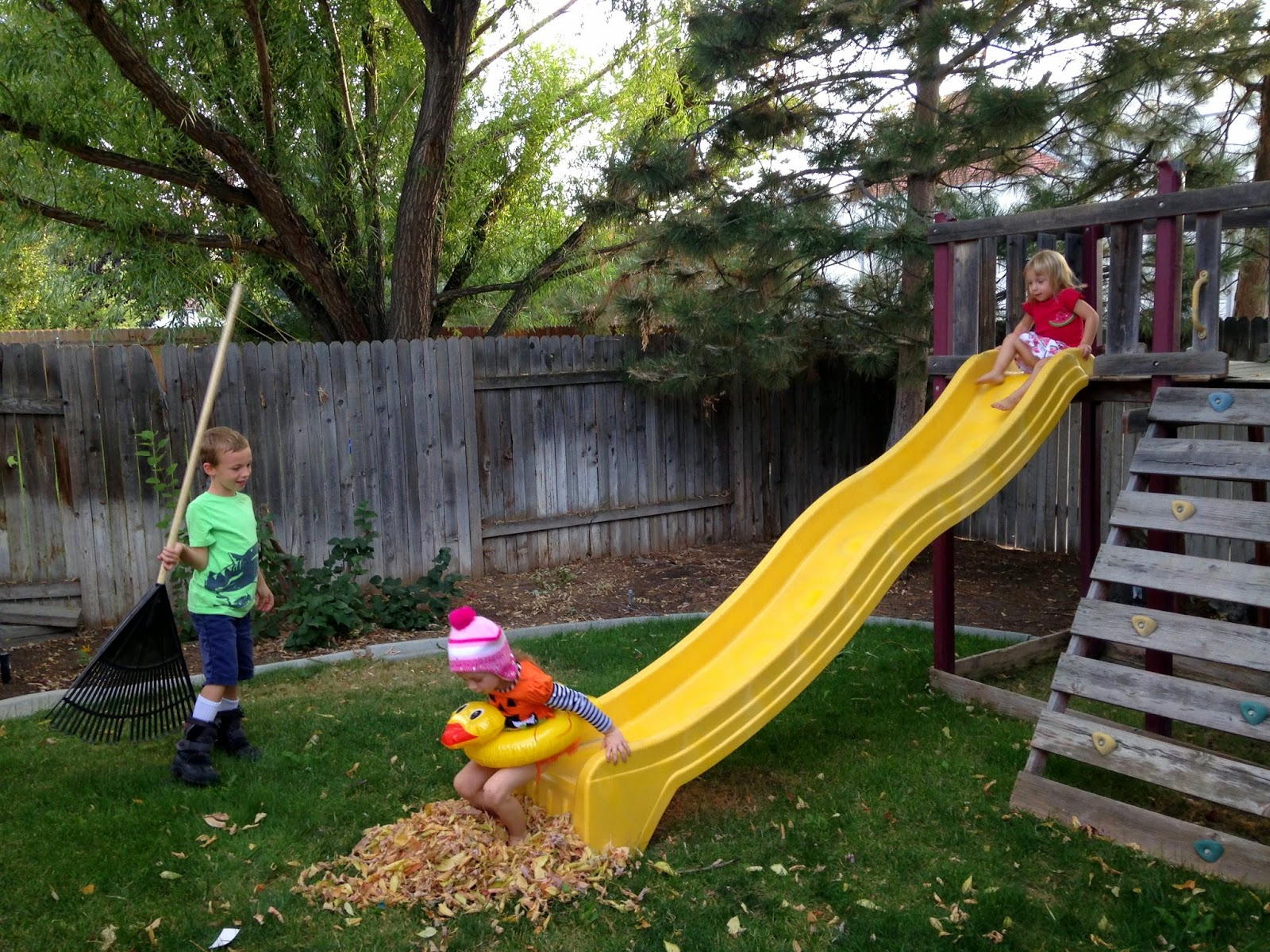 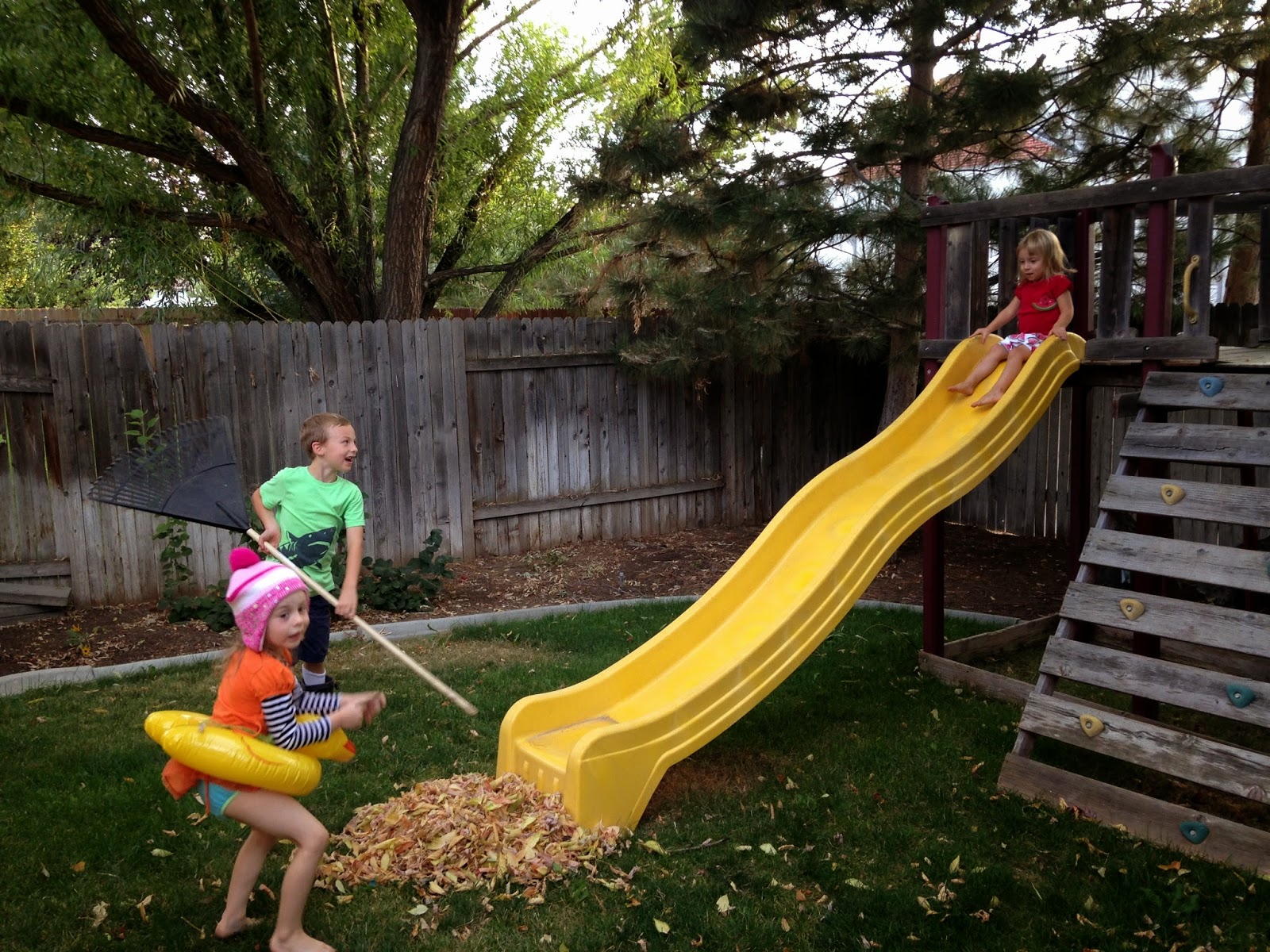 I don't have too much to write about this week. Scott is gone at night a lot with school so that is an adjustment for sure. The kids are in bed when Scott gets home a lot which means dinner and bedtime by myself. It's fine right now but when it's cold outside and dark at 5:30 I'm pretty sure it's going to be a lot harder for me.

Scott is stretched pretty thin right now. He just got another job that is mostly at night as well. It's a commission job where he will only make money if he makes a sale. It's for a company that sells solar panels. So well will see how that works out.

The Hunter's came over to play games with us last night. Scott bought a new game and I was not interested in trying to figure out how to play it so I kind of just talked to Haley all night. I guess I better be a better gamer sport next time or we might not have friends to play games with.

I only took one picture this week but there are a few old pictures on Scott's phone so get excited.

Gabby: "I know why you want to wait for Corbin. Because you love him."
G: "I love glitter more than anything. And also my blanky." 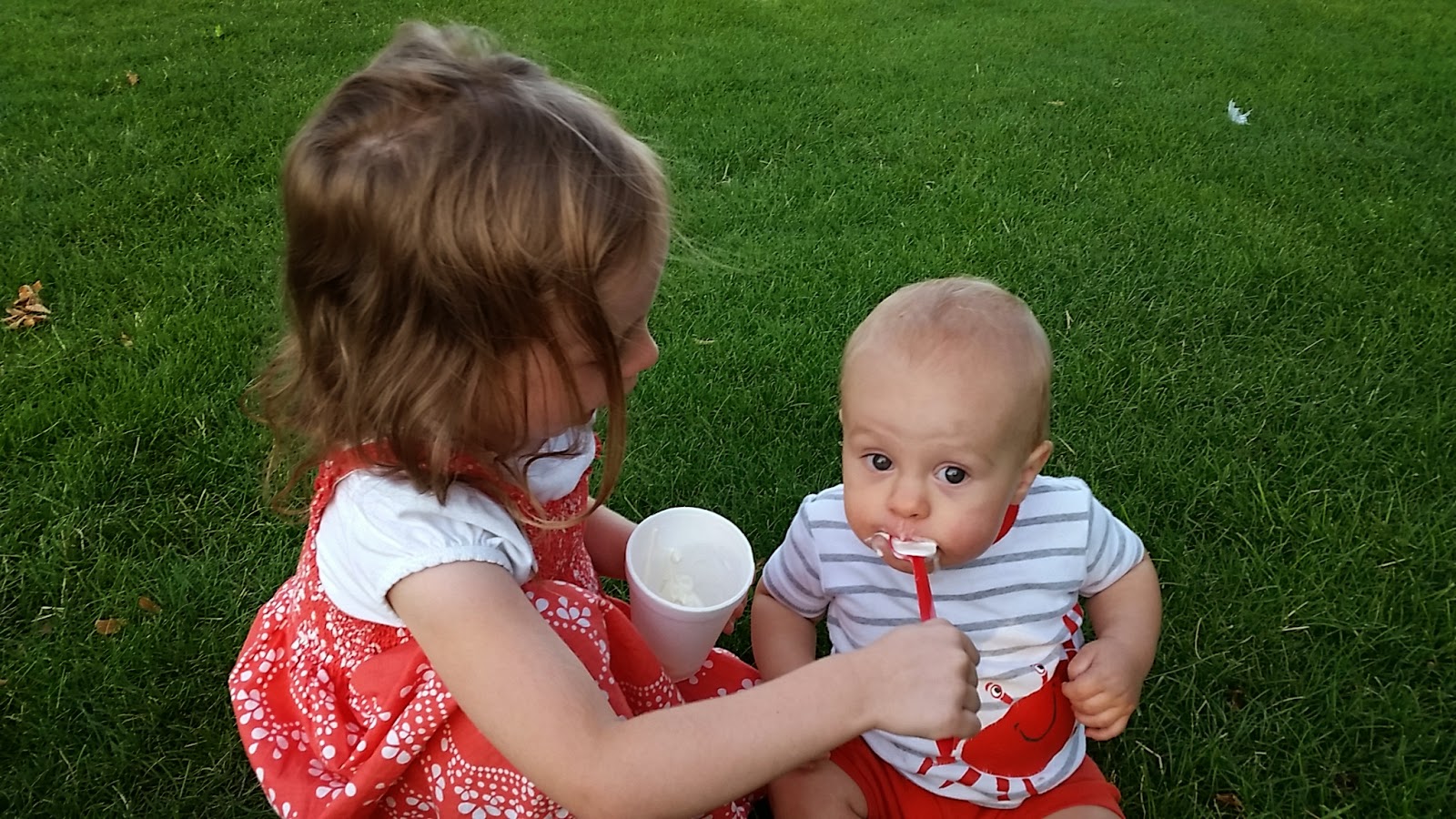 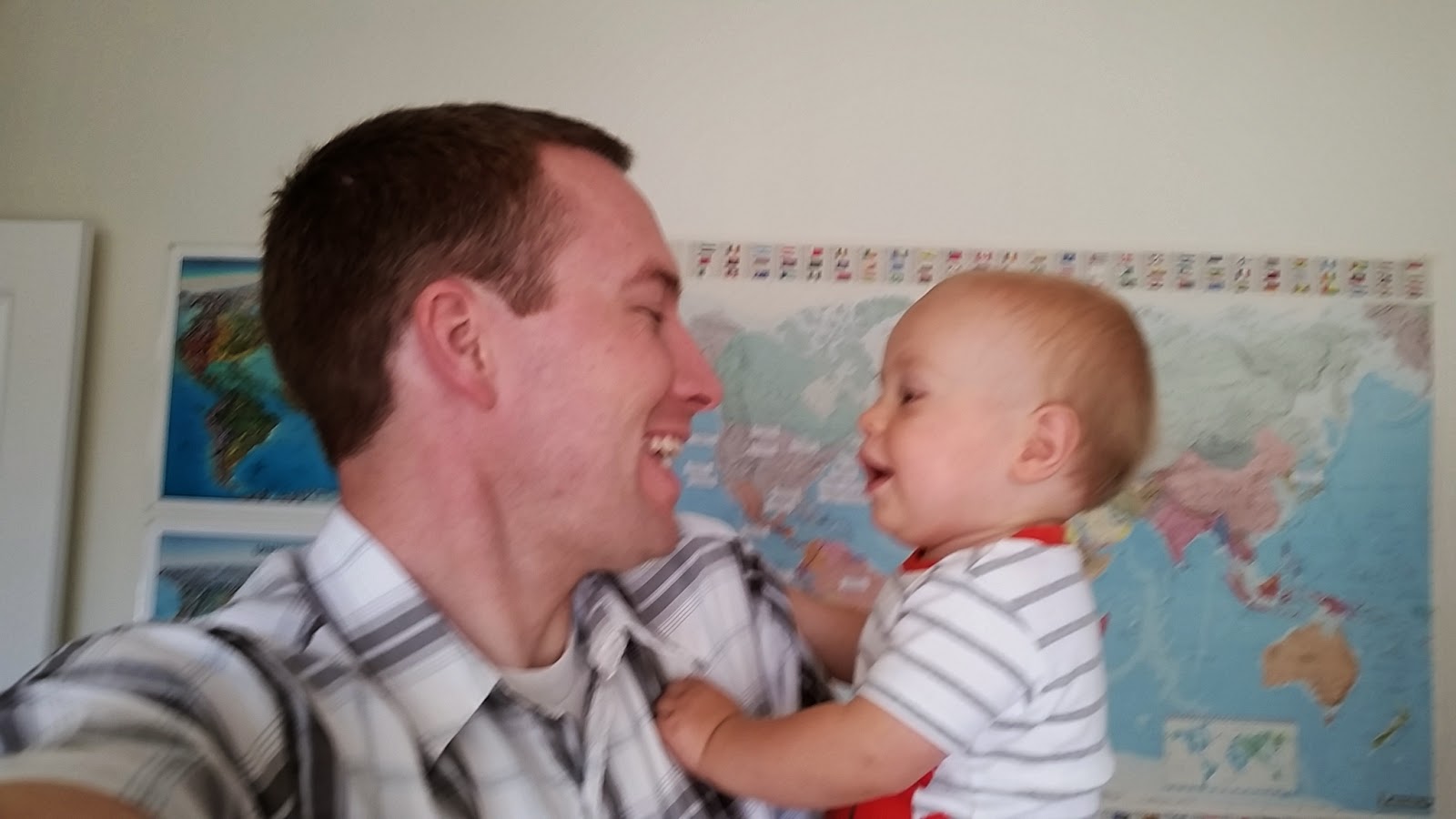 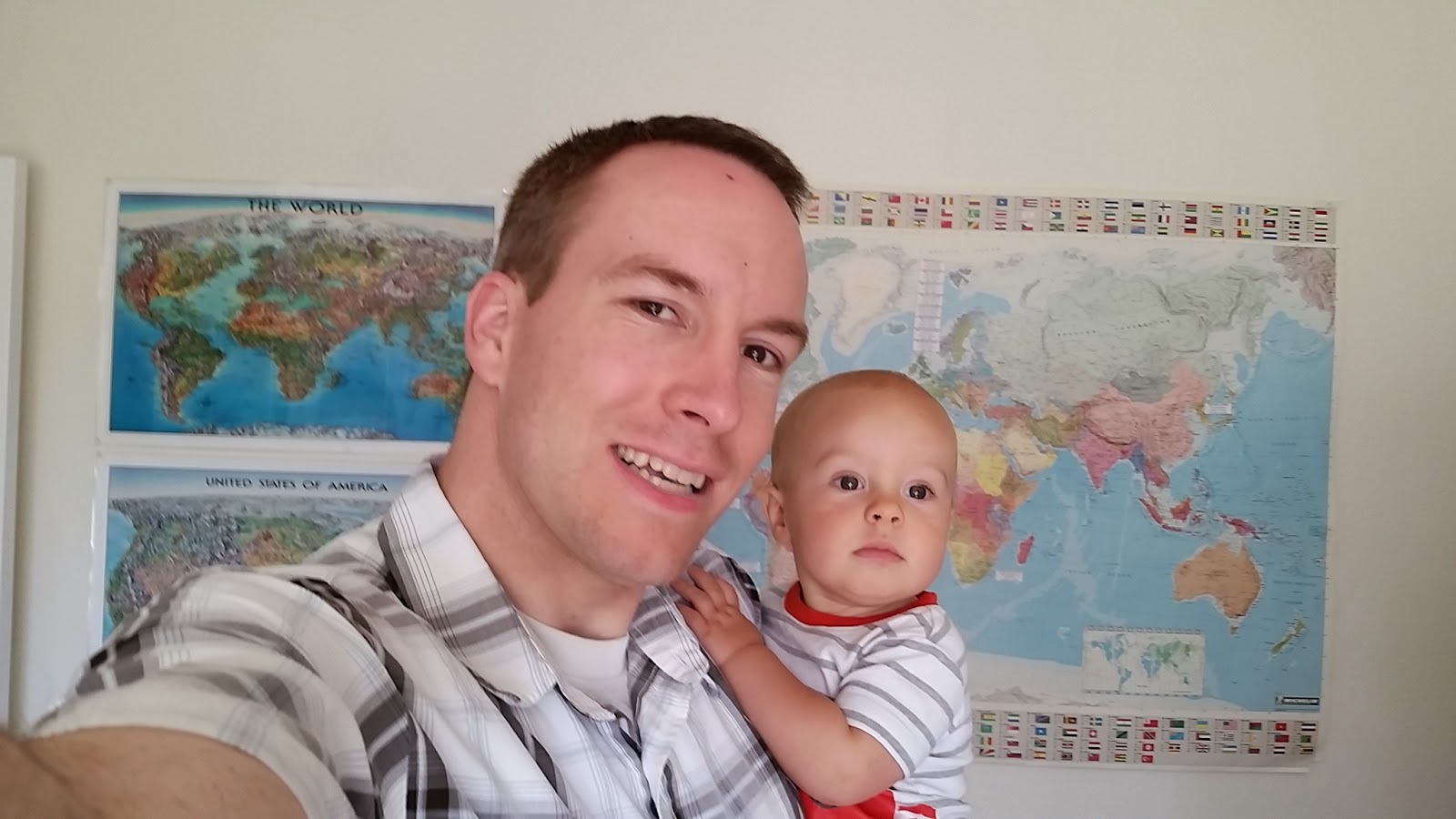 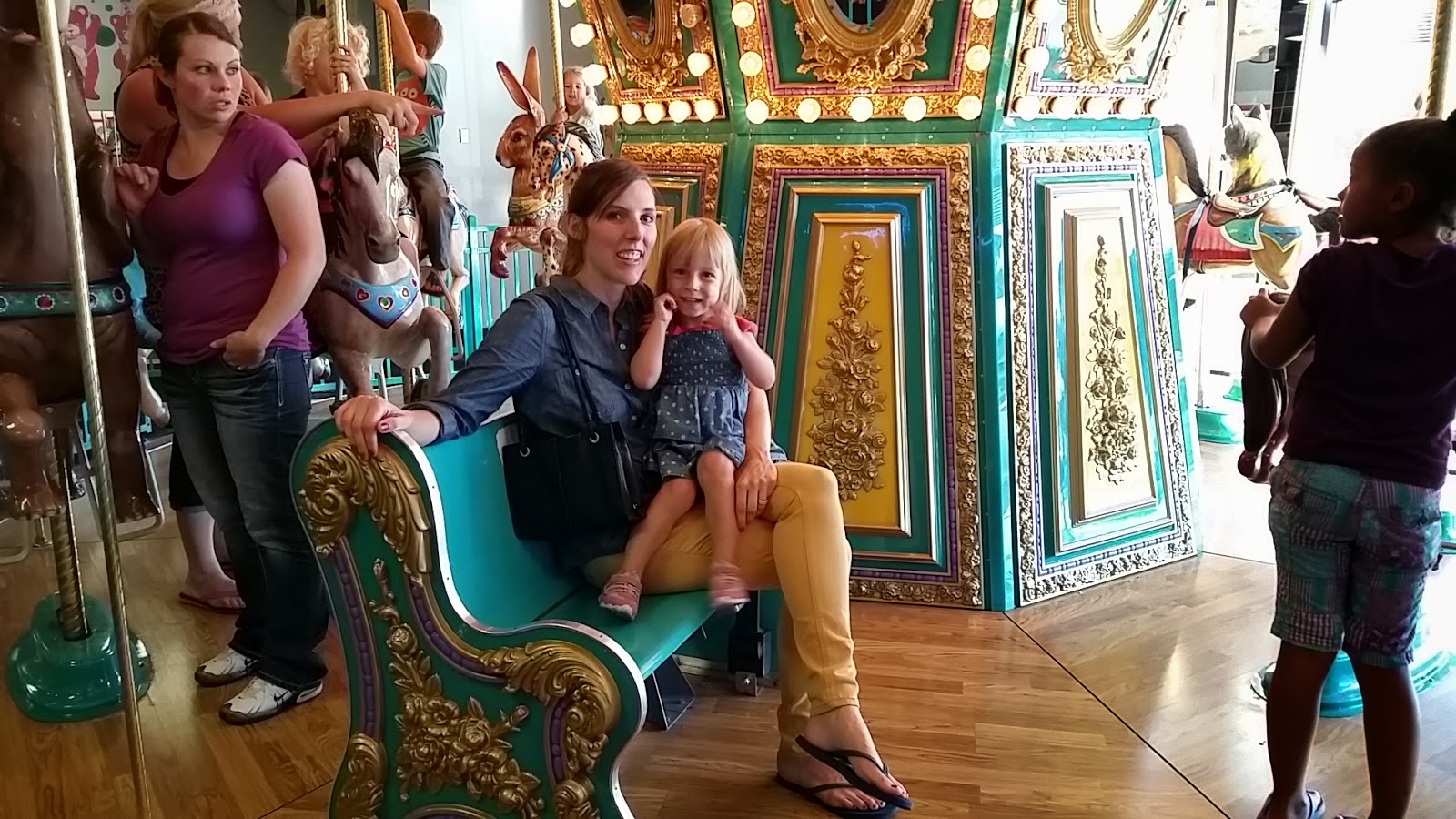 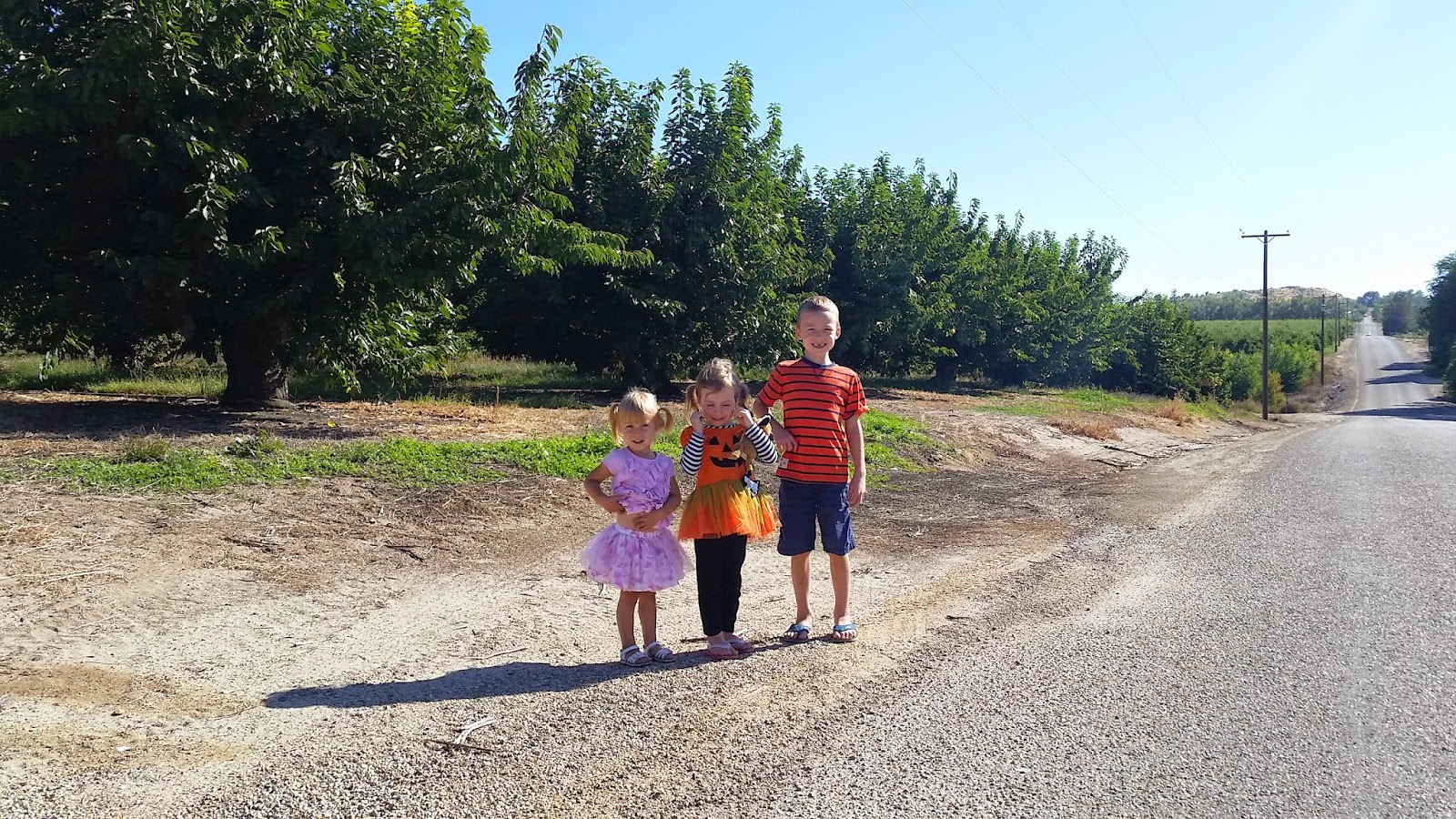 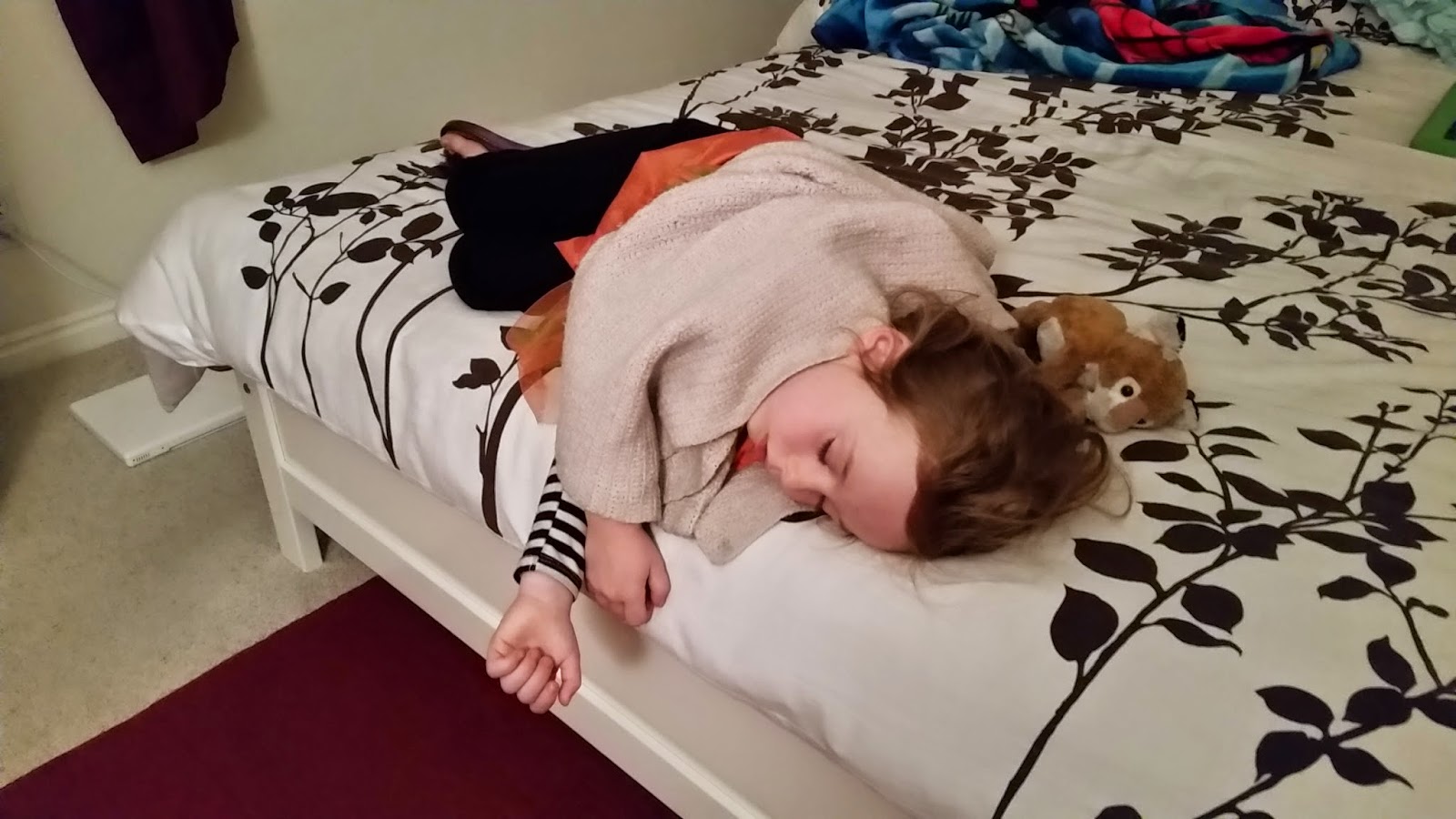 It only took 7 years of home ownership but...I finally painted!

On Monday Anna came over so our girls could play and while we were talking we started to discuss painting because she just had her whole house repainted in the outside. Anna started to talk to me about how it wouldn't be that hard to paint and I decided to just do it. That's kind of how I am, if I make up my mind about something I go for it. So I started to make preparations right away and went and got paint samples and supplies. My samples were WAY too dark so Anna came over Tuesday morning with more samples and we painted a bunch more colors on my wall. After much deliberation with several people I picked my color which is the same color that Anna painted her whole house. It's kind of a greige as we like to call it, kind of gray kind of beige depending on the light and how you decorate it. It's more gray than beige but it takes on that look depending on the light. Anyway I worked really hard Wednesday and Thursday boxing in all the walls so they could just be painted with a roller brush after that. My whole body hurt and I was so tired already.

Anna came on Friday and worked ALL day. She ended up doing most of the actual roller brush painting. I ended up doing things like scrape glue spots that the previous owners had filled their holes with. It was horrible! It would not be painted over and I just had to scrape and pull and scrape and pull. It was so hard to get off the walls. It took forever. I would also have to stop and take care of my children or clean up crazy messes like when a Halloween snow globe managed to break and shatter glass and glitter and water everywhere in the kids room. You know stuff like that!  But we did it. I'm so grateful for Anna's help. She helped me move furniture back and we moved things around differently. Our kitchen table is way better turned the other way. She pushed the couch forward and I actually really like it but Scott isn't so sure yet. I was so tired but couldn't stop yet because above the kitchen cabinets the paint color was really dark gray and almost looked purple. It especially looked horrible with my red kitchen decorations in front of it. So I had to go check out a few thrift stores to look for something and only found a plate to paint so I went and bought some good old spray paint. I love spray paint. I started right in on painting my old decorations and was spray painting outside in the dark.

On Saturday I continued to spray paint off and on all day and scrub my kitchen from top to bottom. It all felt so clean and fresh with new paint that I wanted the rest of the kitchen to be clean and fresh too. I mop my floors often but they still look terrible so I got down on my hands and knees and scrubbed with a rag and my other best friend a magic eraser and cleaned the floor really good. Wow it looks so much better. I swung by Real Deals to look for something that could work in the kitchen and found something for less than $3 that might work and then I made the missionaries homemade Cafe Rio dinner. Holy smokes. I was so happy today was Sunday so I wouldn't work for a hot second. I'm tired and my kids need some attention. Ha! 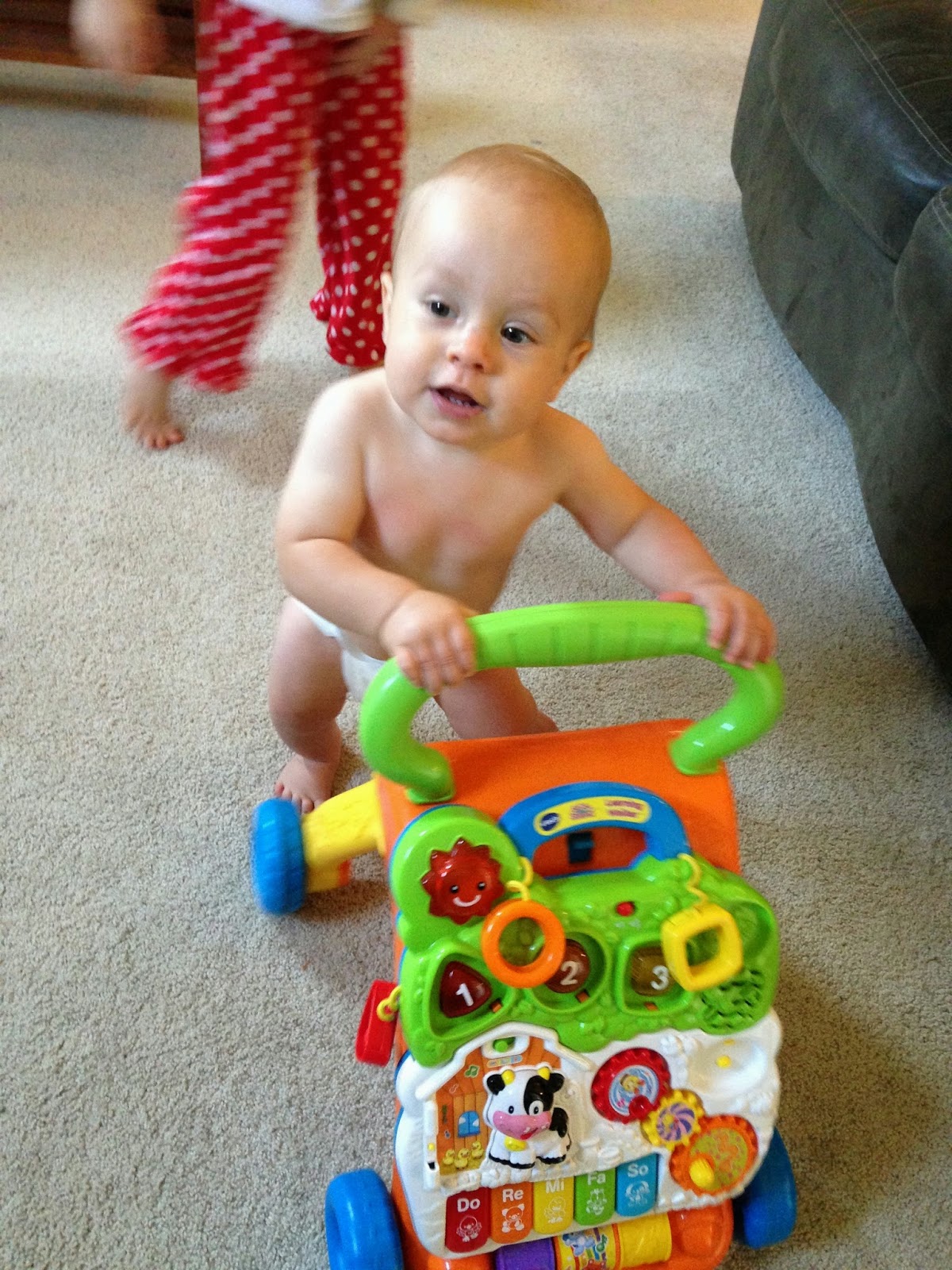 Kid Quotes:
Corbin: "What happens if I don't like it...I get what I get and I don't throw a fit?" Ha. His teacher at his school must say that expression. Hilarious.

Gabby: "I'm going to save the best one for Daddy." (saving him a raspberry from the garden).
"Mom I know who won't listen to anybody? Ryan." (and Gabby by the way).

Piper's birthday was this week. We celebrated it on Monday since that was Labor Day and we could celebrate as a family more. She had a special birthday breakfast of waffles with whip cream, strawberries and blueberries. We took the kids to lunch at BK. After dinner we went to PoJos. Then we had cake and Piper opened presents. She had a great time and she has been talking about her birthday for weeks so it was pretty special for her.

On Wednesday I took the three younger kids to story time at the library, we took a break from that over the summer. It was good except it's during Ryan's nap time. It's hard to juggle all the kids' needs at the same time. He was a trooper but I felt bad.

Kelsey and Justin came to Boise for Justin's brother's wedding. They stayed at our house but we only got to hang out with them briefly. Saturday night we were able to talk for a few hours and have some apple crisp and eat breakfast together in the morning.

On Saturday morning we drove to Caldwell to the church farms to get apples and pears. We were too late for peaches this year. Oh well. I was hoping their honey crisp apples would be ready but they weren't yet. Those are the best! The kids all devoured apples on the way home.

We managed to survive another stake conference. Not my favorite. Our stake has 3 a year. Seriously that is too much man. Well that's all.

Corbin:
"Mom you know what killed me? That you had strawberries and blueberries for breakfast."
"I'm like the king, I can do whatever I want."
"It's so creepy that we have mac and cheese almost everyday." Ha! So not even close to true, once a week at most!

Gabby:
"Mom there's a huge ant in the house." Corbin: "Show me where it is and I'll eat it." Ha. Corbin should not watch Bear Grills with Scott anymore.
"You know what would be a funny name for Ryan? House, or fridgerator, or iPad."

Piper:
"I'm having a rough time."
"I love your earrings." (I never wear earrings and I did today and Piper stared at me and then said that. So funny). 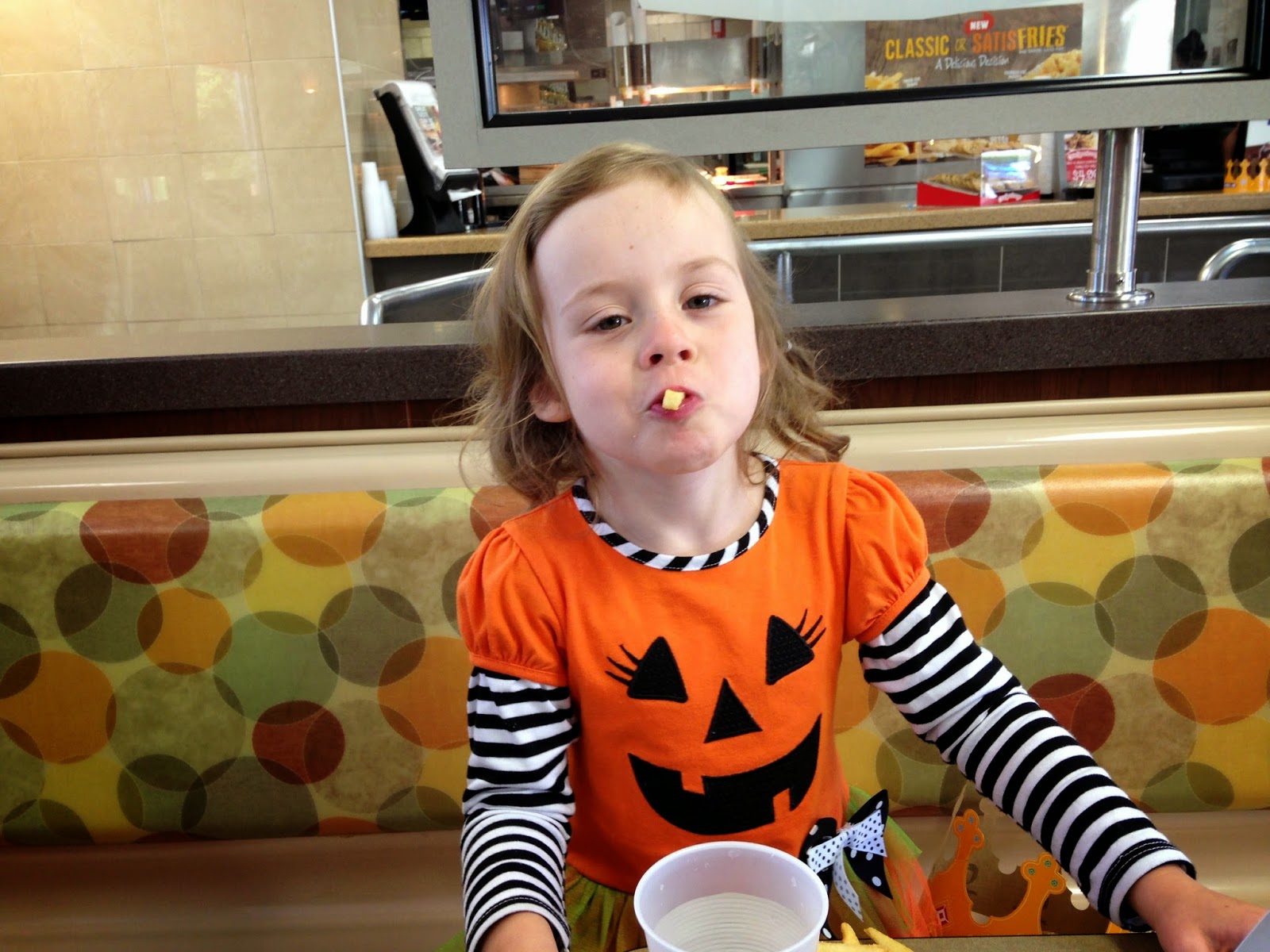 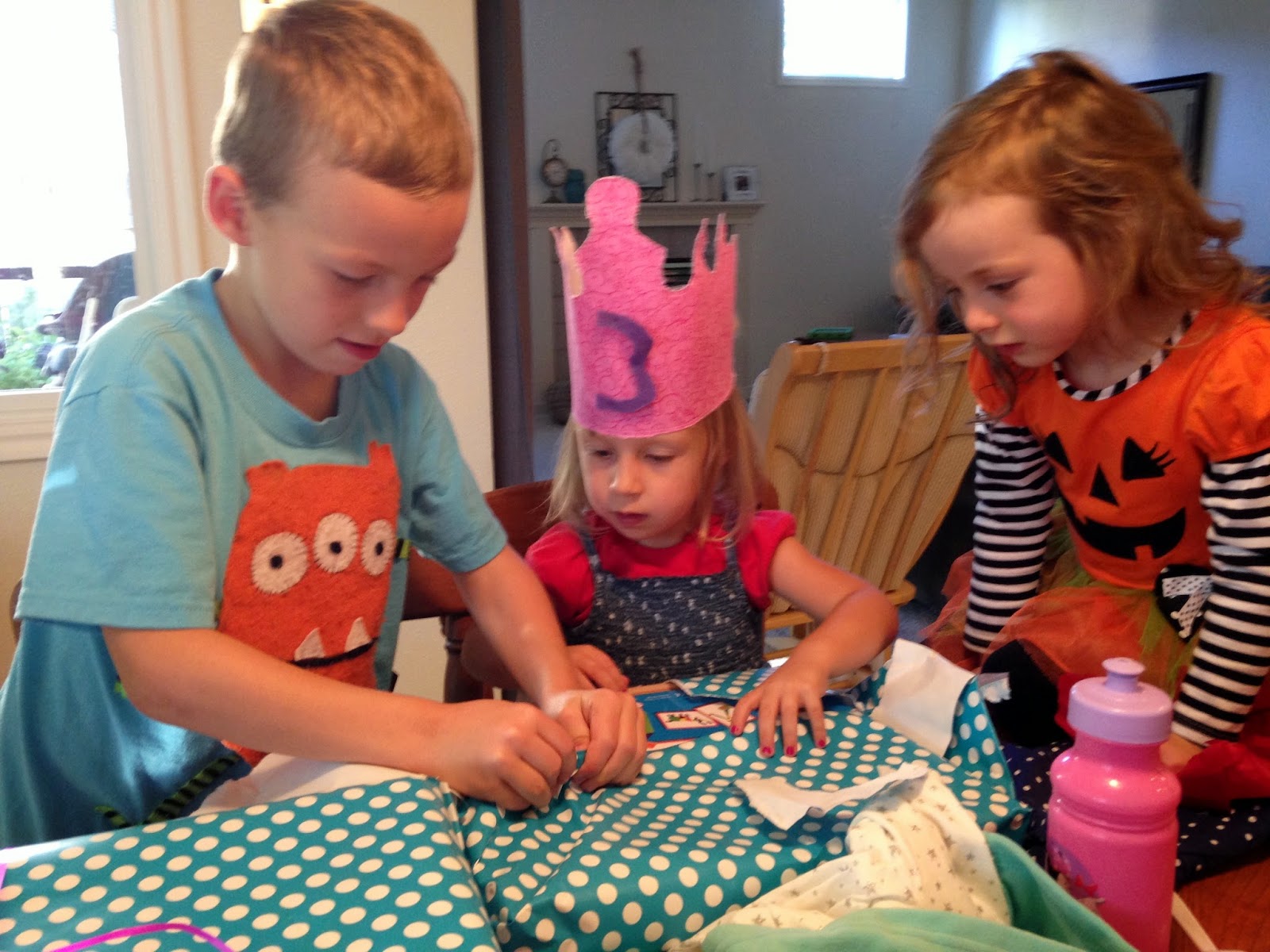 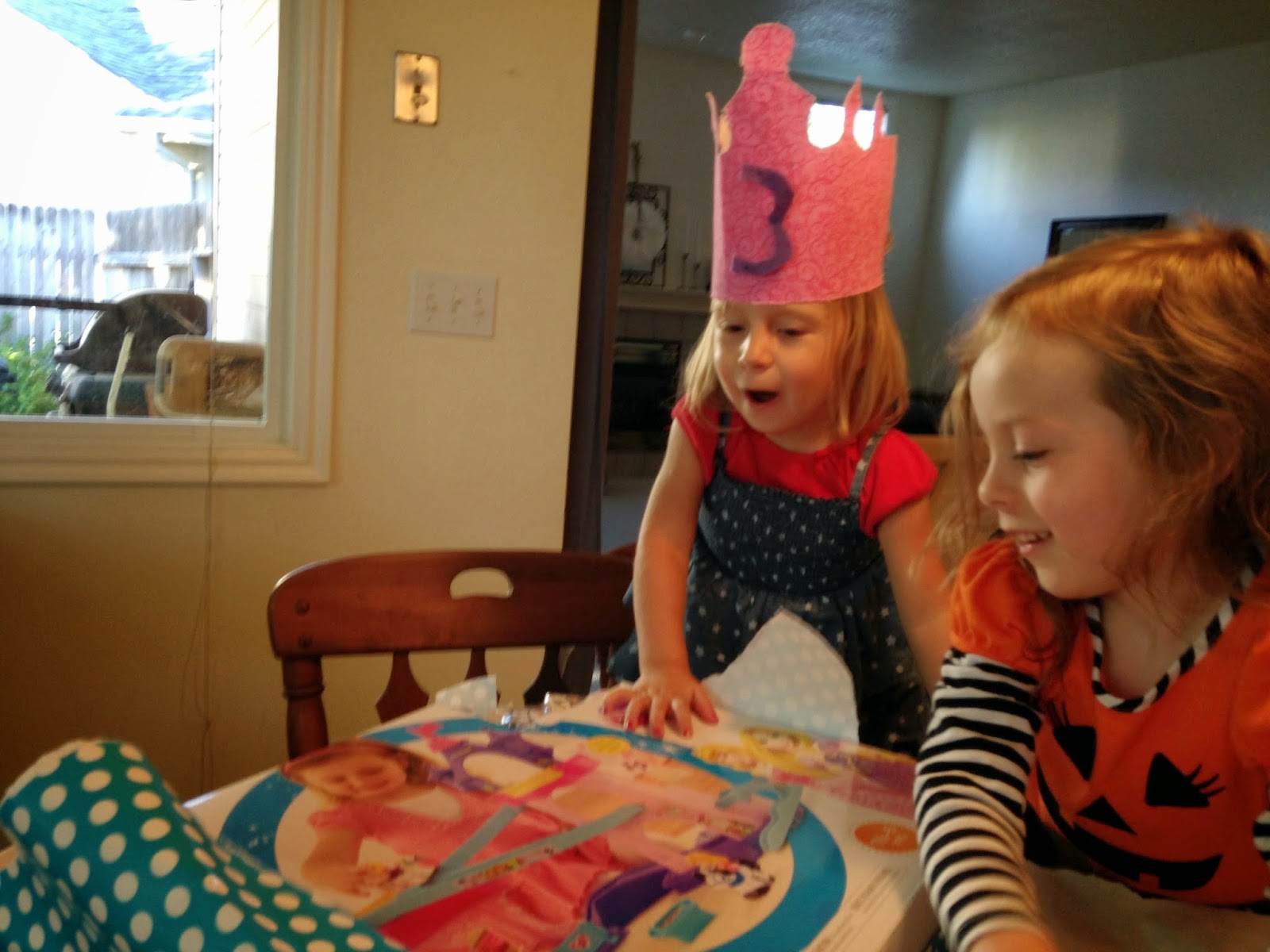 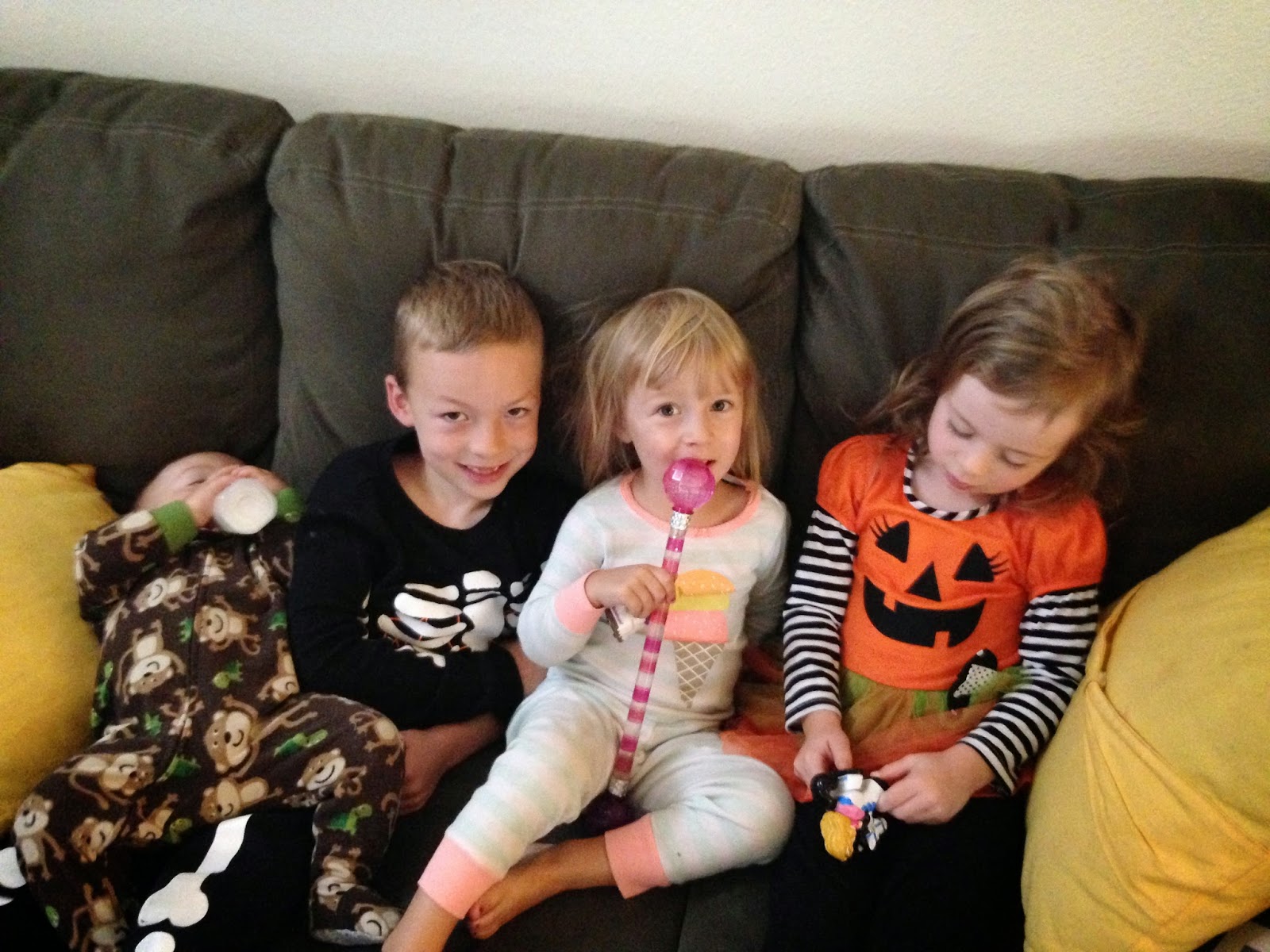 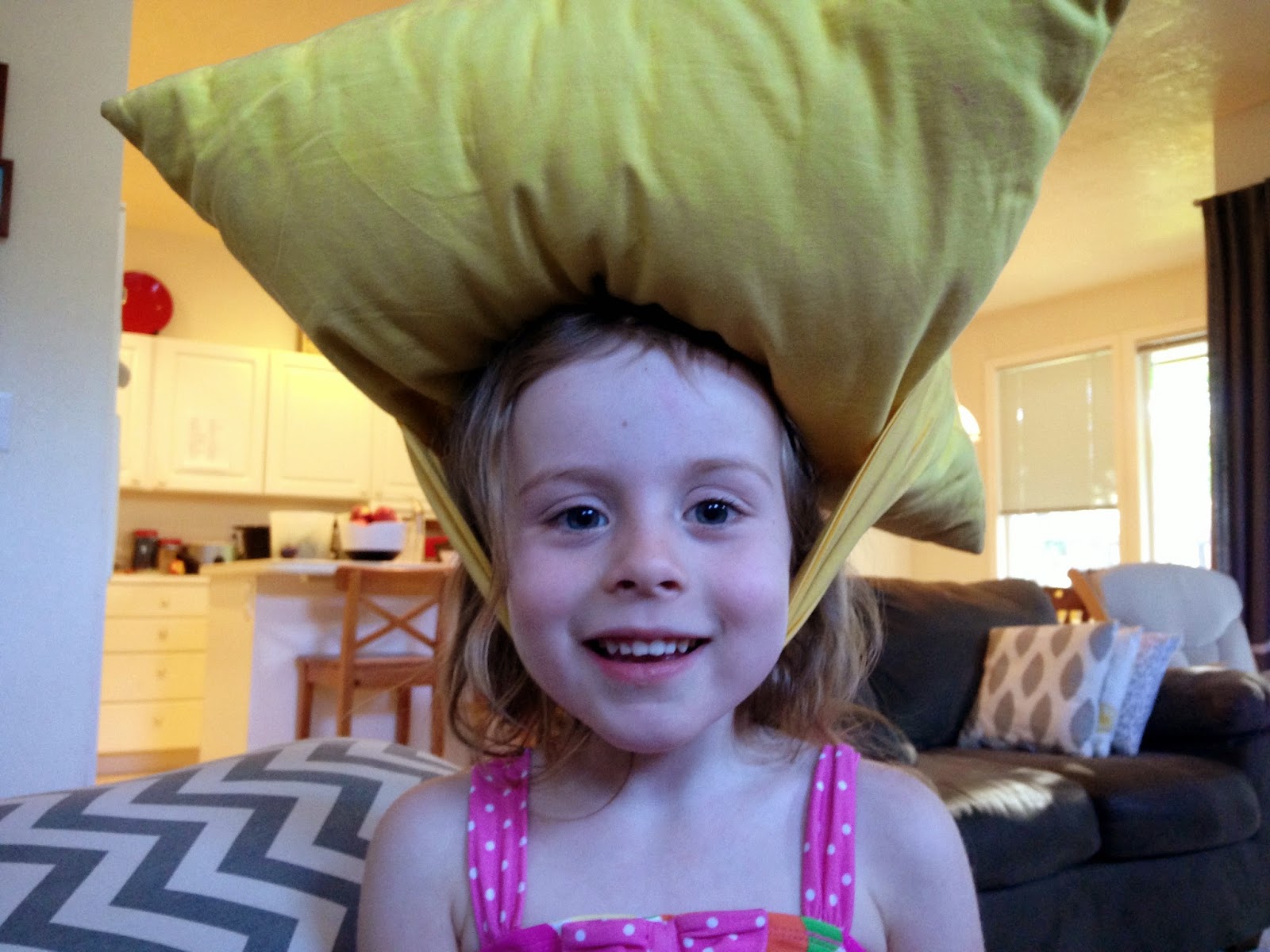 Posted by Mitzi Cannon at 8:34 PM No comments: