Scott and I learned this dance and performed it 2 years ago. I never posted it to the blog.

What a great week we've had. On Monday we got packed and ready. We were possibly thinking of leaving that day but Scott's work stuff took too long. I was kind of bored realizing we would be stuck at home so I made some cinnamon rolls for Christmas morning. I was happy to have a yummy distracting project. We woke up early Tuesday morning and loaded up and headed down. We made it in time for some delicious Hires and then the ladies all snuck away for a pedicure. It was great. My nail technician (I don't know what to call her) did a great job. She rubbed my feet and my calves and made my toes Christmas ready. Loved it. That night we went with the kids to check out the window displays at the Grand America. That is the most beautiful hotel. Ryan had a blast stamping all around that place. He is not scared of people so he just walks all around and people better get out of the way. We drove home through temple square and saw as many lights from the car as possible. It was crazy crowded. It was nuts. The lights are spectacular.

We shipped all of our presents to Utah so I had a ton of presents to wrap when we got there. That kept me very busy for a good long while. All of our presents made it but one, you know the one we paid $15 in shipping, ya that's the one that didn't make it. We need to call and complain about that one! On Christmas Eve we went to the movie Big Hero Six. We all enjoyed it. That night Mandy and Carole made amazing fondue for dinner. It was kind of nuts to do with kids and it took a couple of hours by the time it was all said and done but it was very good. After that we sang Christmas songs and finished out the night with The Musical Scrooge. We didn't get to the gingerbread houses, talent show, or reading of the Christmas story.

Christmas morning we had our kids open up our presents and then we headed next door to Colie and Rustin's for breakfast. It had snowed beautiful snow in the night! That is always my Christmas wish. It was so beautiful. After breakfast we headed back over and opened presents for a few hours. The rest of the day kids played with their presents and went sledding. That night we had Janet's delicious Christmas dinner. After dinner we had a little talent show, Scott and I rein-acted famous love scenes! It was terrible! Or rather, I was terrible. Then we played a new game. Later on we played the game Spit well into the night.

On Friday Colie and Rustin took the kids to the Madagascar movie. Later in the afternoon Richard and Cat came over with their kids to sled. They lasted for hours. Their 4 and 2 year olds were little dare devils! So were Corbin and believe it or not, Gabby. Corbin sledded for about 4 hours! Nicole and Rustin's backyard has the most amazing sledding hill. The best part is it's right in the backyard. When you get tired or cold you walk in the house, It's amazing! That night we decorated gingerbread houses. Those dang things are hard to build!

Saturday was Corbin's 7th birthday! We went to the Museum of Natural History to check out the bug exhibit. The kids were loving it there and we were at the museum for 2 1/2 hours which is about 2 hours longer than I like to be in a museum. Ha. But the kids were loving it so that's all the matters. After that we went to Red Robin for birthday dinner. Corbin ordered 3 entrees and got a huge stack of on the house onion rings. After that is was back to the house for donuts and presents. Corbin made a killing. He may have a Christmas birthday but he also gets to spend his birthday with the Cannons and gets extra presents. After presents we played one of his birthday games with him before bed.

This morning we drove down to Orem to attend sweet Hannah's baby blessing. After the blessing we went and had delicious brunch. Tonight is Janet's Sunday dinner and hopefully some games. Fingers crossed. 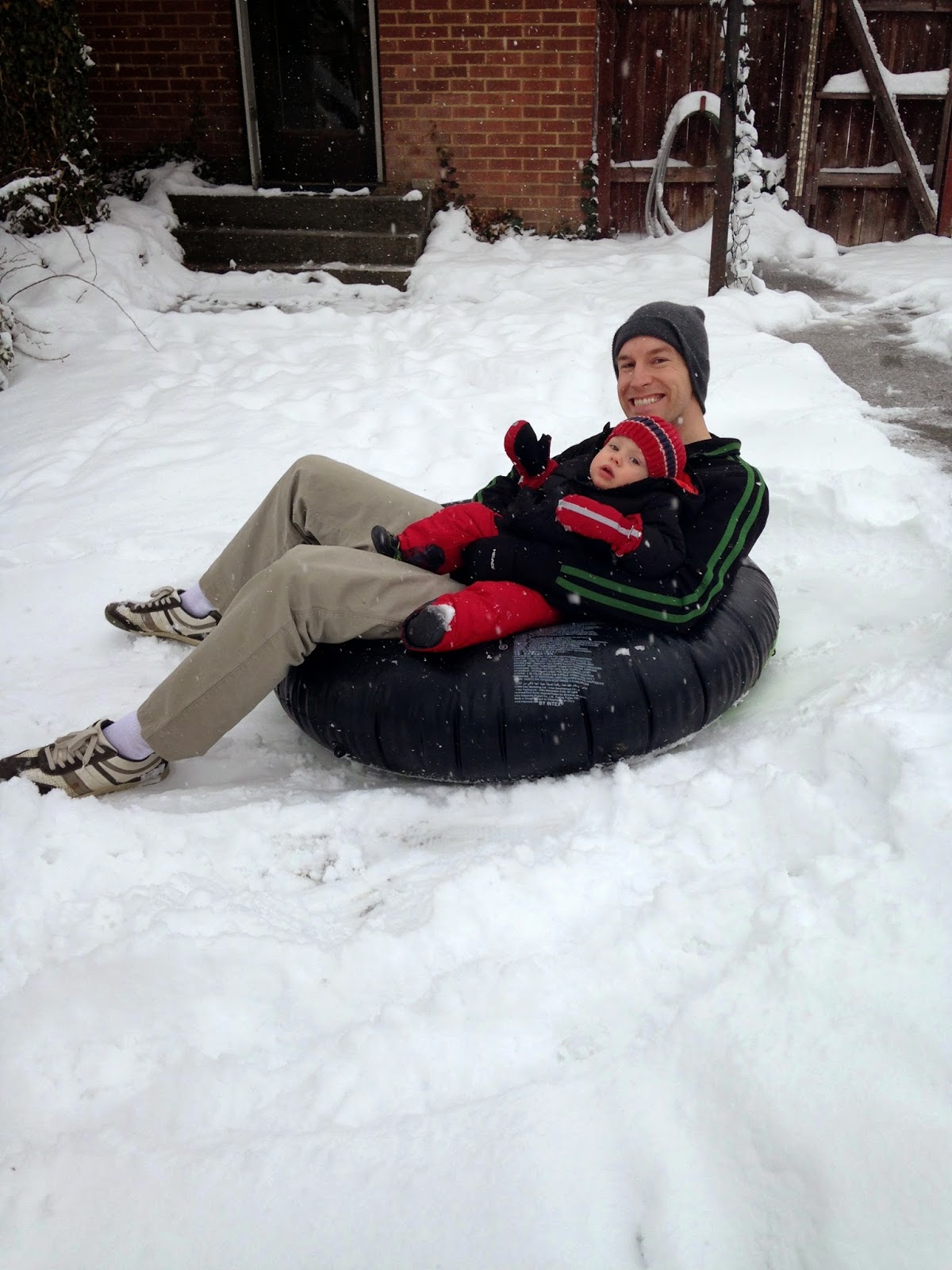 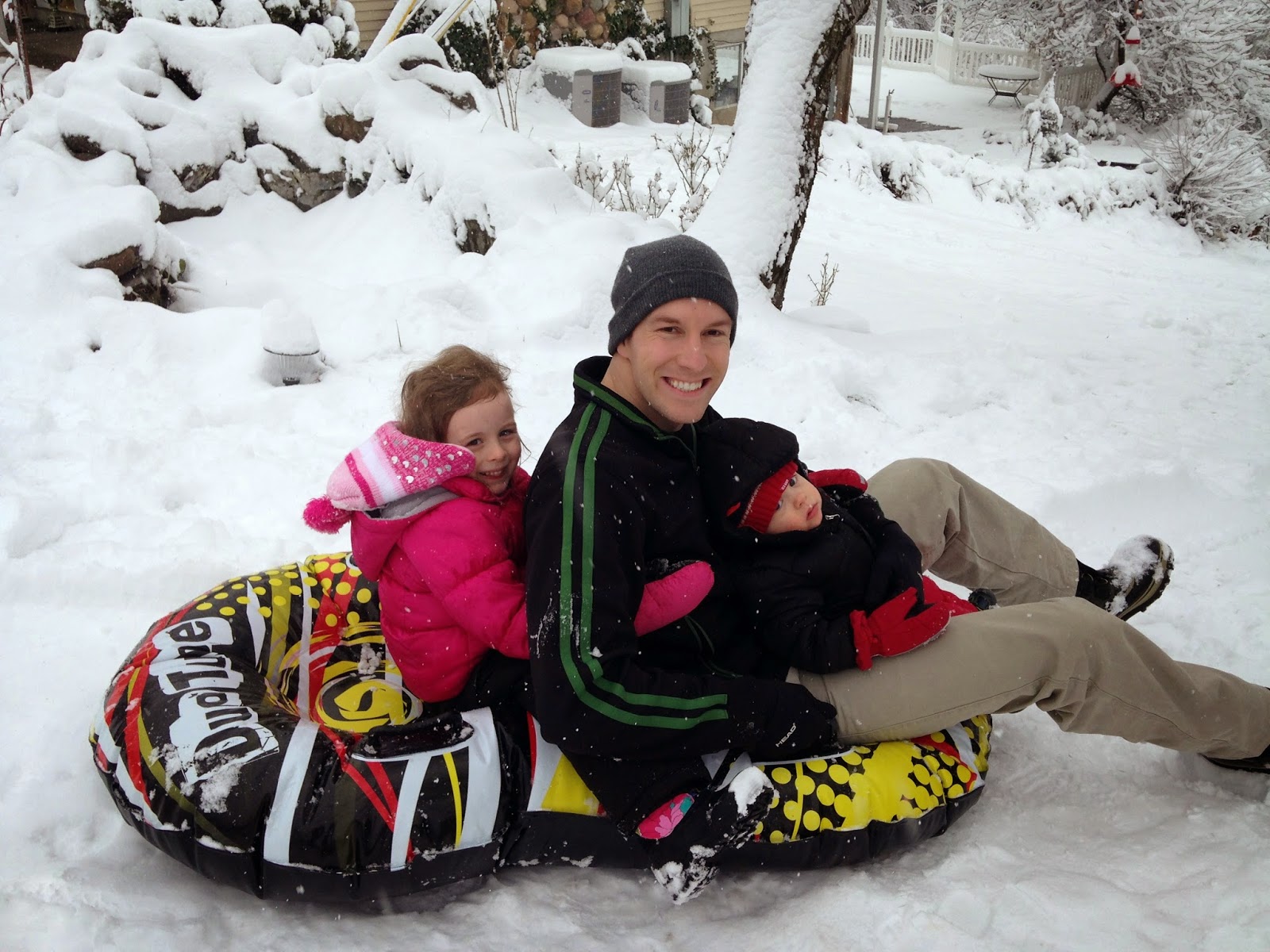 I have been sick on and off this whole winter so far. It's been so annoying. My kids have been too. They pretty much have an ongoing cough situation and Gabby was so sick Thursday night that Scott gave her a priesthood blessing. Hopefully we are working it out this week and we will be better for Christmas. I have had a sore throat all week and could barely talk all week. I also had serious coughing fits that brought me to tears and nearly barfs one time. Seesh. I went to the temple yesterday and I had been doing well all day and throughout the session but then I started coughing and despite having a cough drop I continued to cough on and off for what felt like forever! It was horrible. I was so embarrassed. I was red and sweating from embarrassment. It was a sight to behold. Luckily the coughing finally stopped. Phew! Today I was barely able to sing in the ward choir, we sang 4 numbers. I had to stop singing at choir practice to try to save my voice for the performance. It was a really great sacrament meeting today. I loved it! (Probably because I was on the stand and Scott had to manage the beasts alone). There were also a lot of amazing musical numbers as well. Scott didn't seem to think it was as amazing as I did, (I wonder why?). Ryan did manage to escape and walked from all the way to the back of the chapel onto the stand heading straight for the cello. He's a rascally one.

I went to the movie Meet the Mormons with a friend this week. It was at the dollar theaters so I found someone to go with me. Scott didn't want to go badly enough to pay for a babysitter. At this stage it's often easier for us to leave the house in shifts. Scott actually went on a nerd date of his own this week and went with his fellow nerd coworker and friends to the new Hobbit movie. He and his boss have similar tastes and personalities and are both somewhat anti-social so despite the former the latter caused them to wait only 4 years to actually do something together outside of work. Unfortunately the movie was a bit of a disappointment although the social aspect was not.

On Saturday night we had a game night with friends in our ward. We had a good time eating and playing games and being kid free together for a few hours.

I can't believe Christmas is in a few days. Crazy. Corbin is so excited to be on Christmas vacation. 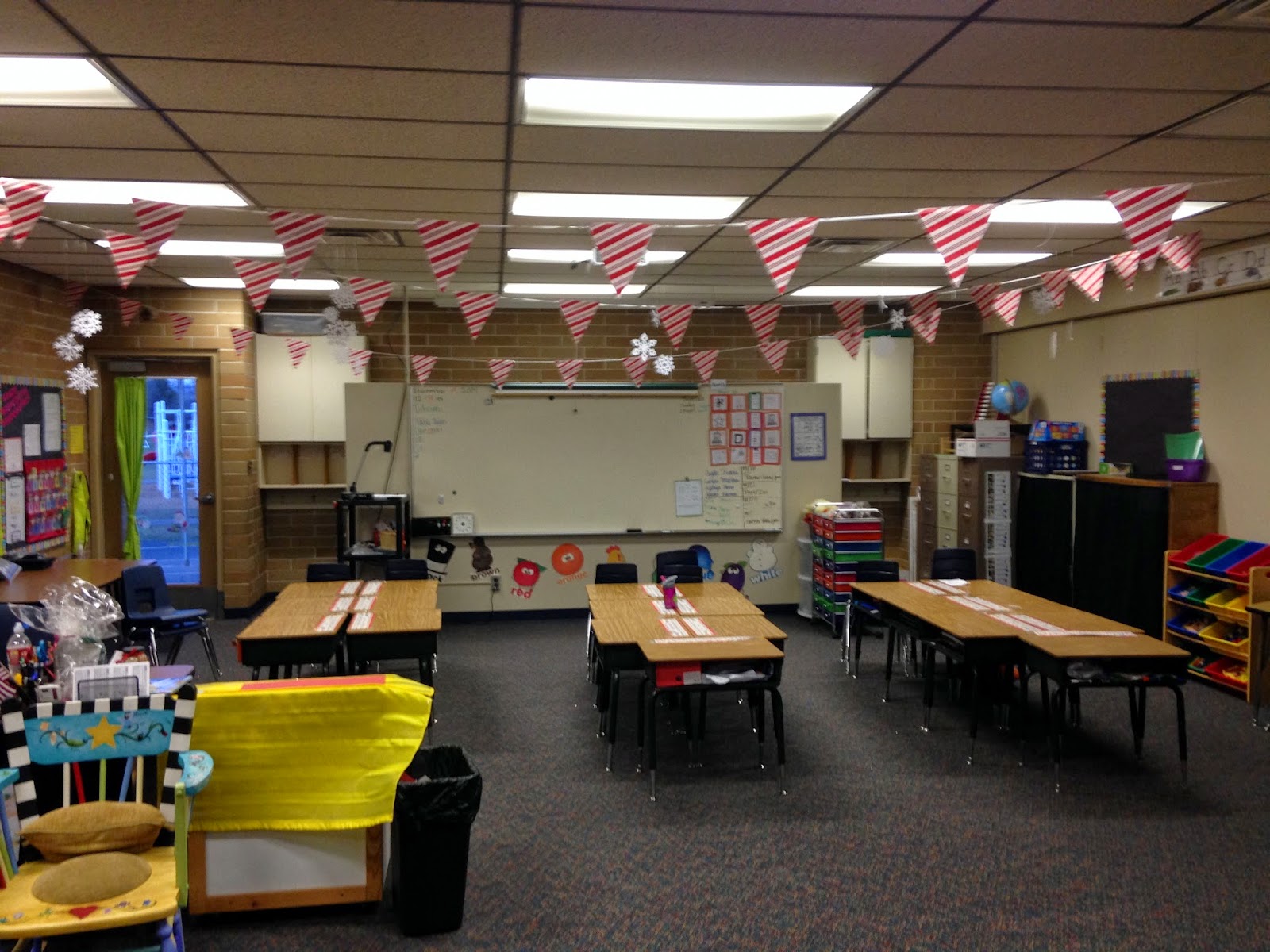 Last week I was busy getting out our Christmas cards and taking neighborhood treats. I bought and packaged gifts for all of my kids' primary teachers. We went and delivered most of them last night. We ordered all of our Christmas gifts online and we are having them shipped to Scott's parents house. Scott is going to have to do an amazing packing job on our way home.

We did a service project for our Relief Society meeting this month. 8 of us were able to go downtown and help serve in a soup kitchen. I don't know if it's the small town girl in me but it's really weird to realize that I live in a city that's big to have soup kitchens. I don't know anyway sometimes the realities of city life is weird to me. It was pretty neat to see the work that goes on down there.

Piper quote: "I'm allergic to this dinner." Ha. She said that because it was a dinner she didn't like and also because they have a friend in the ward who is allergic to almost everything. Every time she comes over her mom has to leave me with an Epi Pen and instructions. No joke she is allergic to dairy, gluten, pork, beef, nuts. You can't believe what that limits her diet to. Like who knew that fruit snacks have pork in them? Or that taco seasoning has gluten. Crazy. Anyway needless to say because of her my kids have taken on a whole new interest about allergies and keep asking me what they are allergic to.

Well I'm definitely feeling the business of the season but not stressed out yet. We went to an ugly sweaters party last night. That was fun. I had to come up with a few white elephant presents and ended up wrapping up unused freezer items and Mexican chili suckers. You're Welcome!

I don't feel there's much to say this week. I'm just the same old busy with these kids. Sometimes it's a wonder I get anything done.

I did get to drop by Corbin's class and help his teacher for a minute. Hopefully I can do that once a week. I ended up helping her cut some papers in the teacher's prep room. I love it when I can go in and help do assessments or have the kids read to me or something. I like it best when I can interact with his classmates that's more fun. I also like having an idea of what's going on.

Kids
Corbin: He has learned how to play Settlers of Catan. He's pretty good. We both lost to Scott tonight. Why does Scott always win!
Gabby: She has started learning her letters and she sometimes even lets me sit down with her and teach her how to write them properly.
When we were leaving for Thanksgiving Scott said, "Please bless our house to be safe." and Gabby said, "The zombies won't know we're gone."
Piper: Lately she loves to watch and help me cook or bake.
A Christmas song came on the radio and Piper said, "Mom, that song totally freaks me out."
Ryan: He can now get up from the middle of the floor and start walking. He has two new teeth. 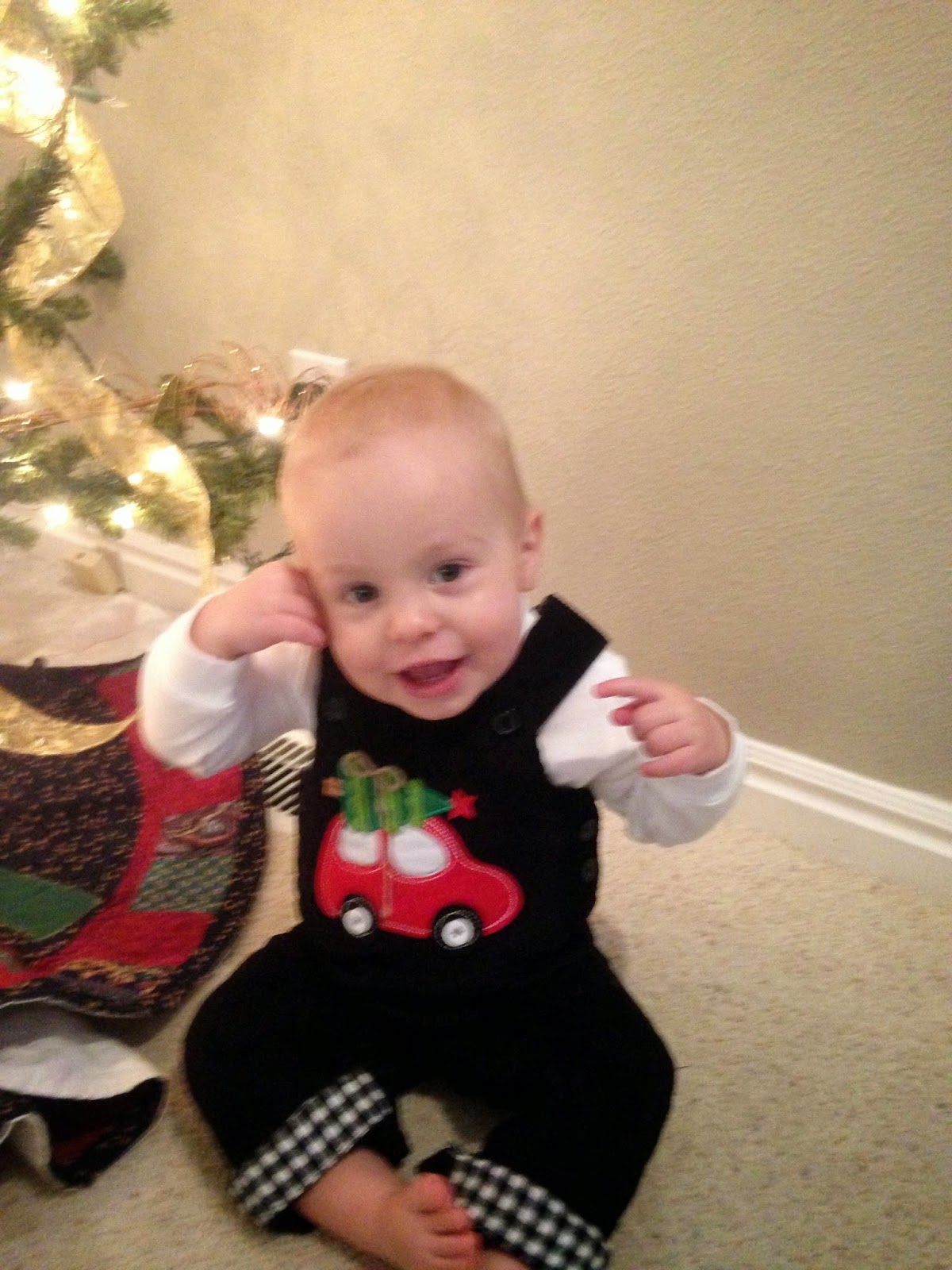 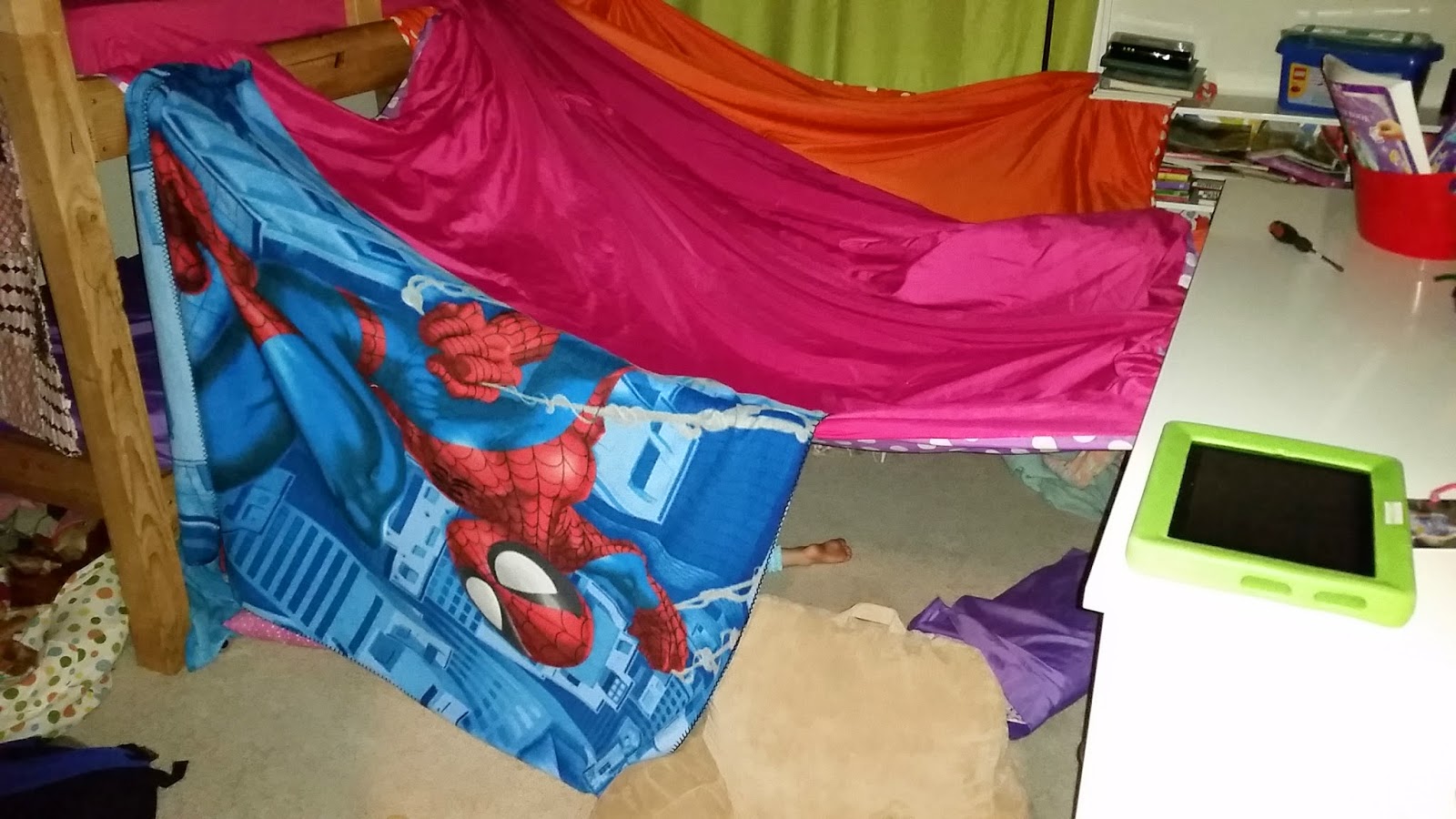 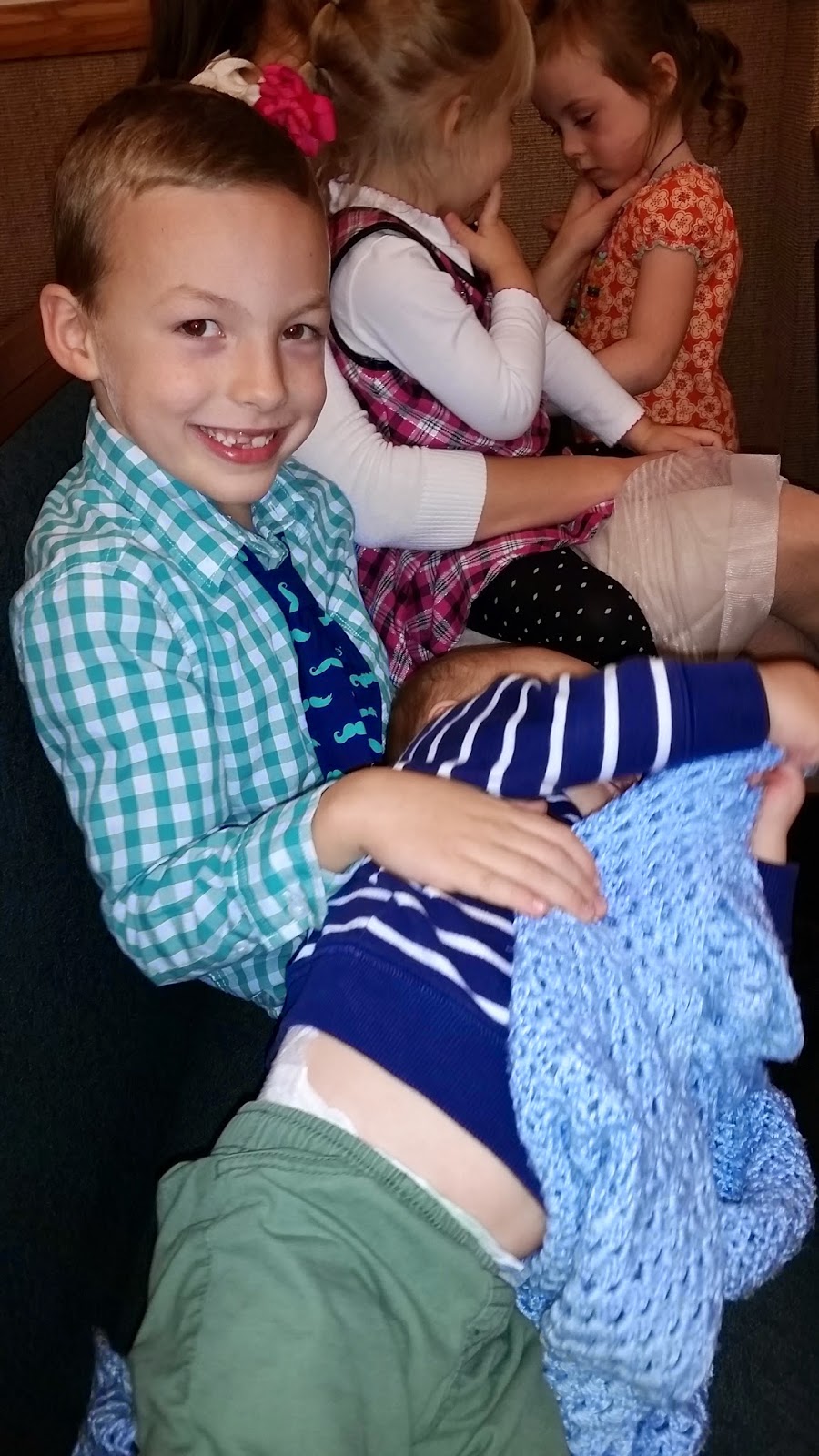 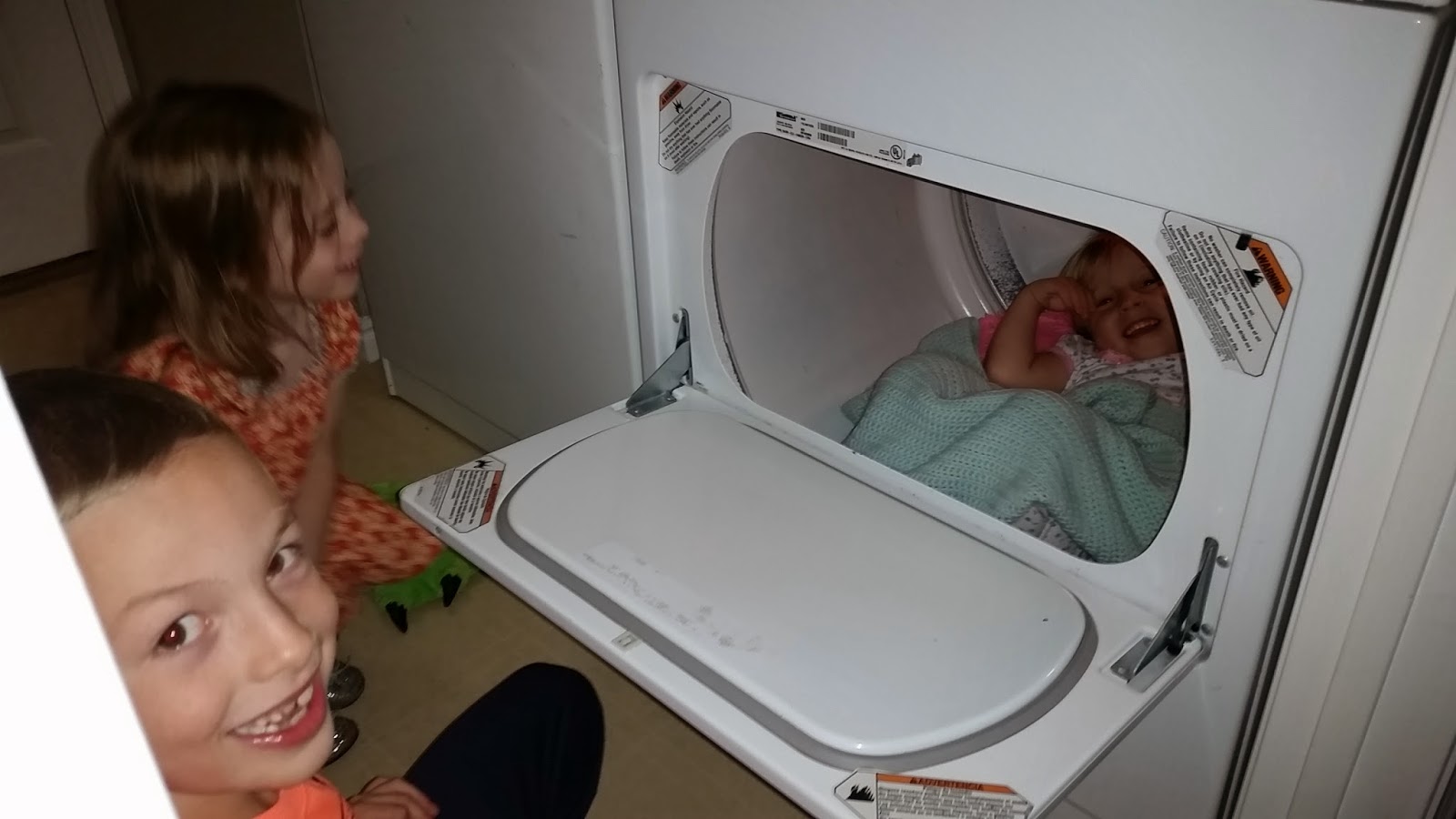 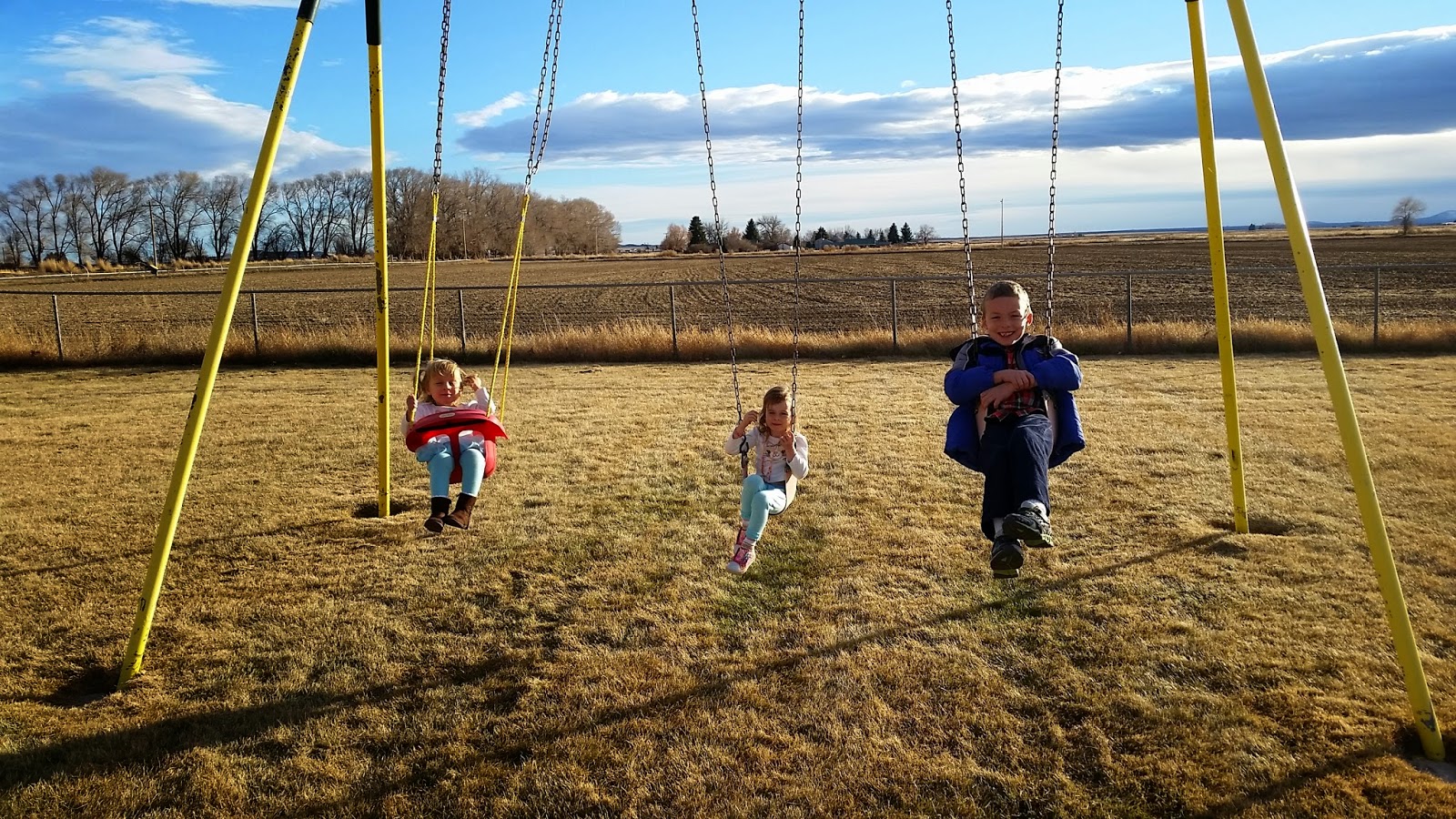 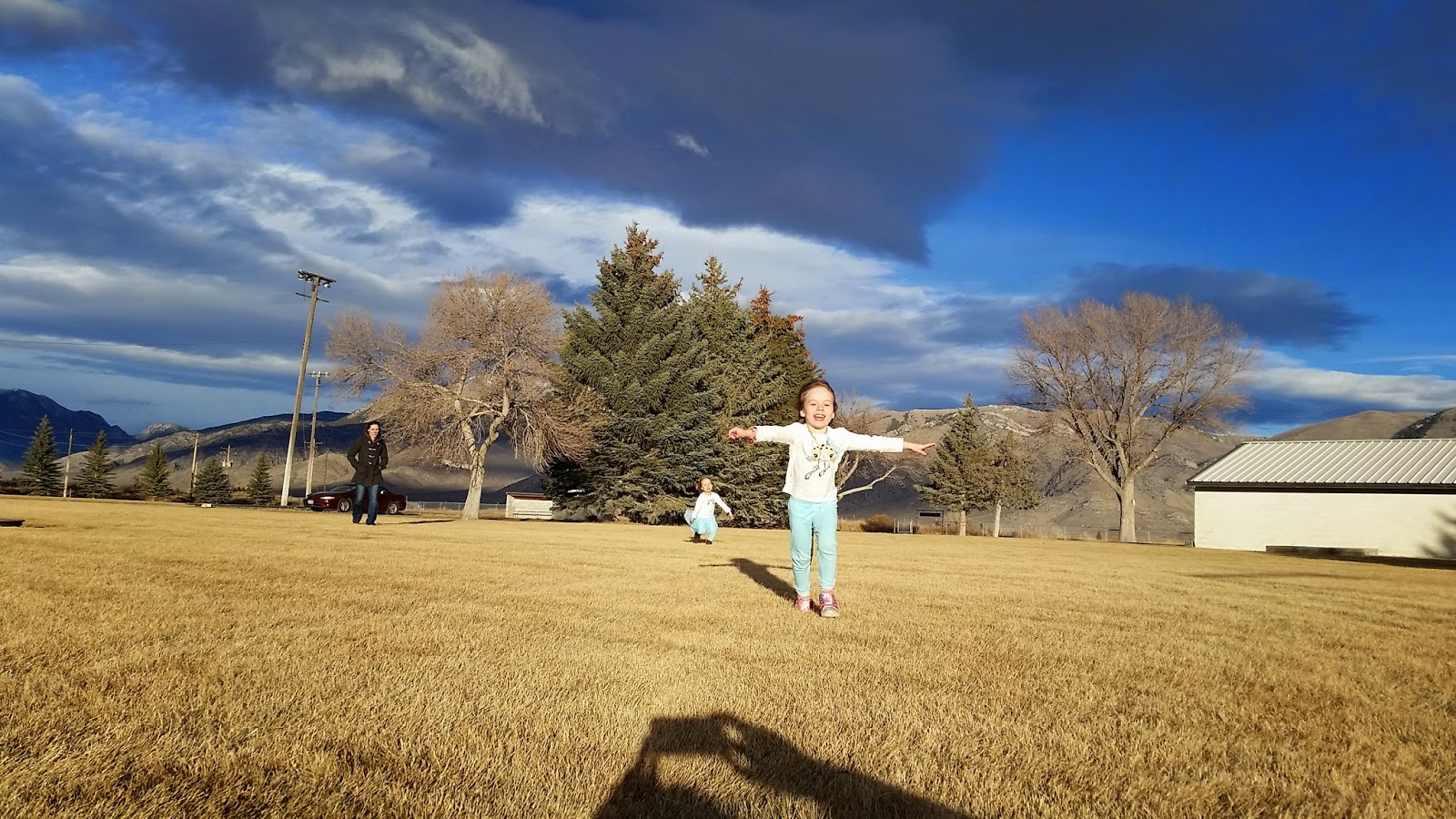 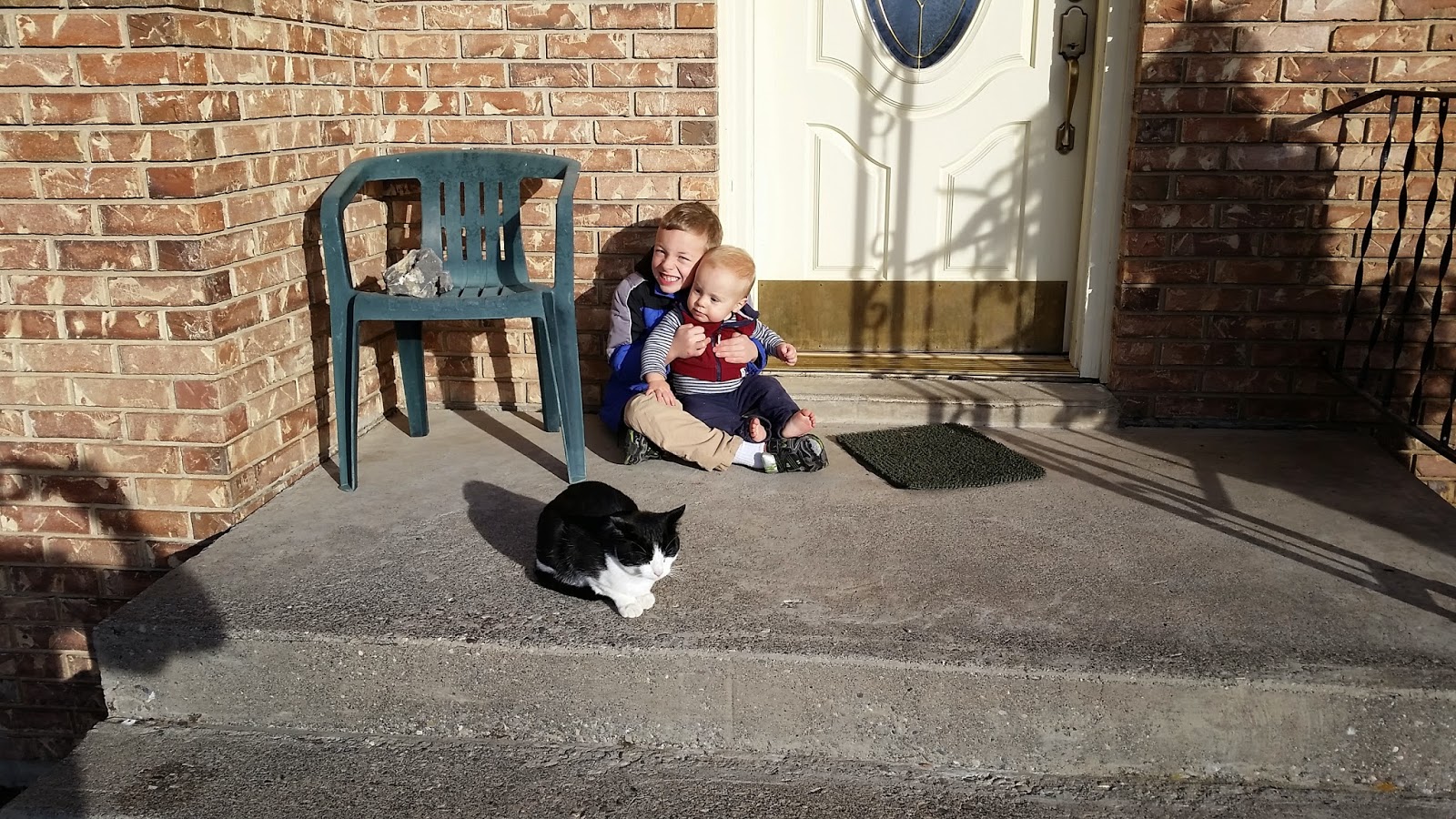 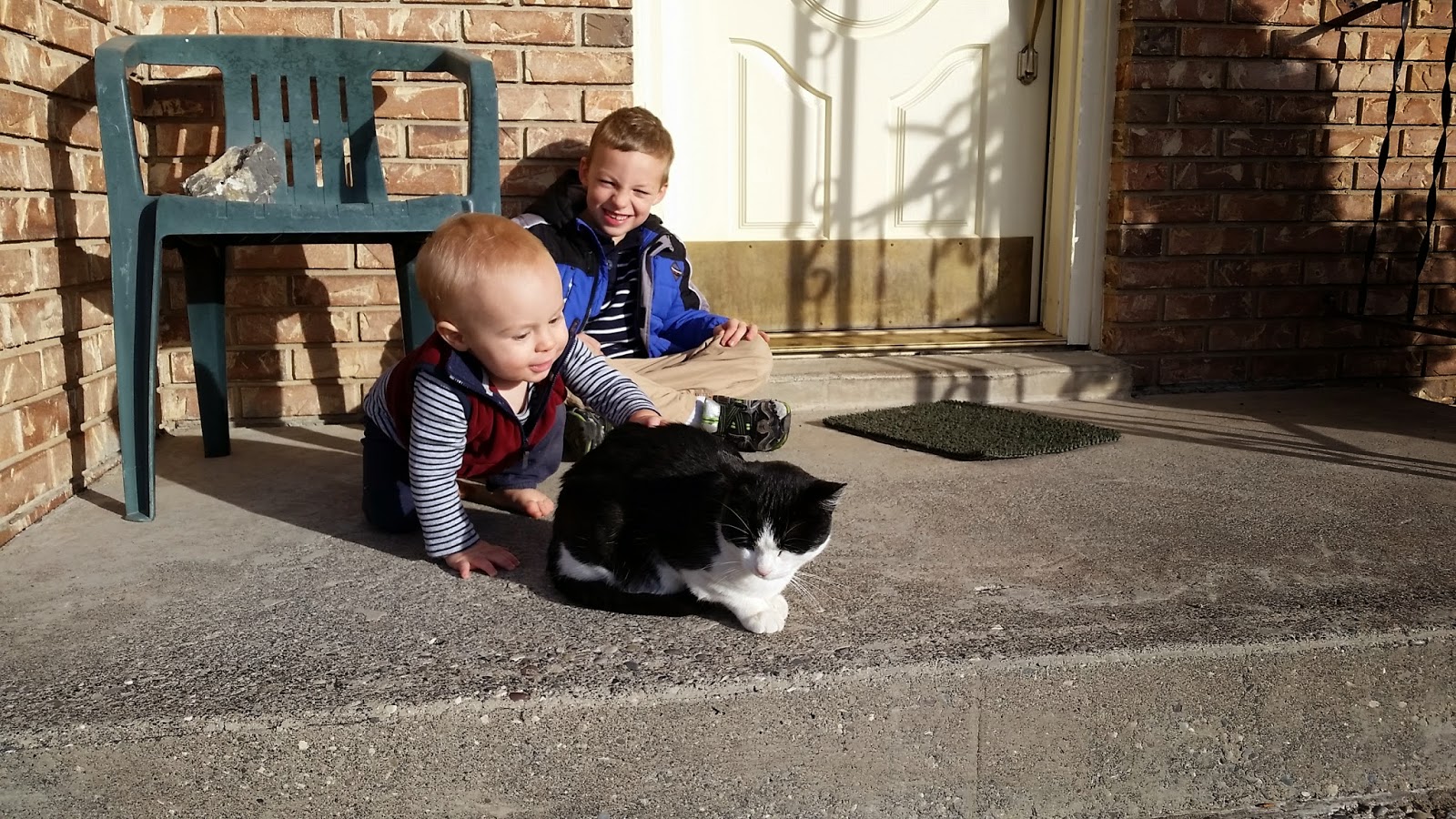 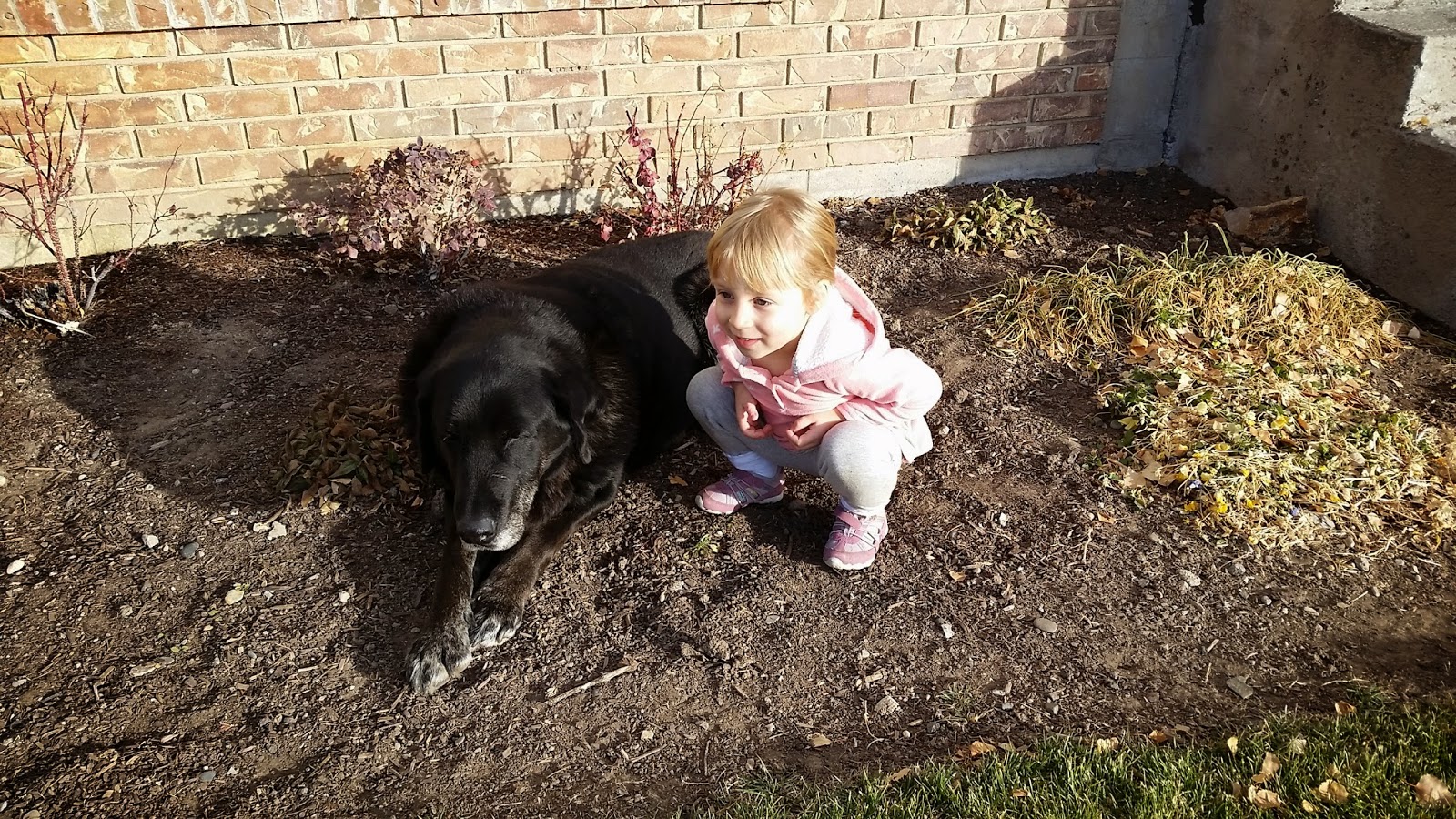