Nothing much to talk about from last week. I got a free table from someone that I'm working on and I'm hoping it turns out cute. I'm also working on a jean quilt and some baby shower gifts. Along with the usual demands with the kids and household. Ryan is not doing great with potty training. I am tempted to put him back in diapers. I just might. We will see. Speaking of the little devil, I mean Ryan, he turned three yesterday! I can't believe it. We are loving the freedom of not having a baby around after almost 9 straight years. We carved pumpkins yesterday and went to Pojos.

Some things about Ryan. He is LOUD, really loud. He likes to talk in a really drawn out low tones, Paapaa... He likes to read books. He loves to play in the dirt. He will go out to my flower beds and grab fistfuls of dirt and throw it around and all over himself. He's a stubborn cuss. He's a cute little guy, we just love him to pieces. 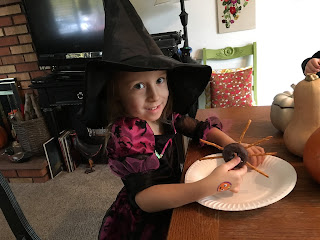 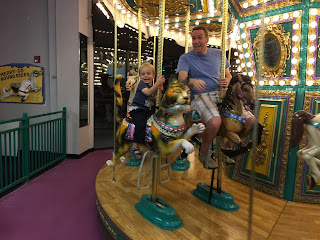 I have been potty training Ryan this past week. He's doing pretty good and I haven't done much. Since this is the third attempt he already knows how to pee in the toilet so I didn't have to do much there. The first few days I was just having him pee regularly because I didn't want to deal with accidents but then I decided I needed to see if he actually understood the urges and would act on them. I bought some juice and pumped him full and then waited to see if he would tell me. Miraculously he did! I did that for a few more days and he's got that part down. He will come and tell me when he needs to pee. Music to my ears! Finally! He still poops in his underwear everyday. I'm hoping he will figure that out soon. He is very resistant to do it on the toilet (as most kids tend to be) so we still have to jump that hurdle. He wakes up wet every morning as well. I think he is trying his best to keep my humble. Ha. My other kids were trained day and night at 2 1/2 and Ryan is 3 this week and may have to do the pull up. Oh well!

The kids had Thursday and Friday off of school. That can make for some LONG days. We went to Camelback park on Friday. The weather was beautiful and Corbin, Gabby, and I did a little hike while Scott watched the other kids play at the park.

Yesterday we went to a Halloween party. My friend went ALL out. They had a bounce house, face painting, pumpkin hunt, and pumpkin painting. The food was yummy too. It was someone from my book club that invited us so we didn't know most of the people there so that was kind of awkward but it was still fun and the kids didn't seem to mind. It was a good time and the weather was beautiful and my friend has an amazing backyard so it was all good. 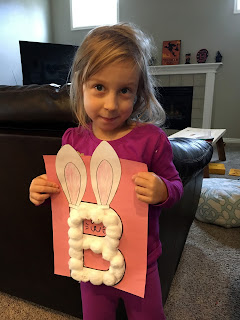 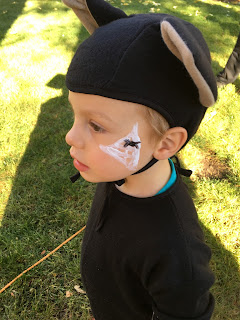 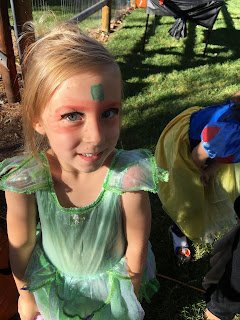 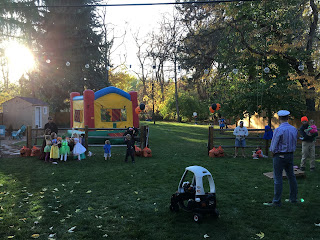 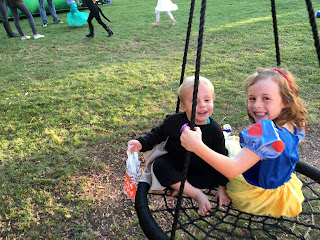 Scott is on his way home from China right now. He quit his job with Ameriben about a month ago. It wasn't a good fit for him. He was/is trying to figure out what to do now and found out about these guys that buy things in bulk from China and then sell it on Amazon through Amazon. Scott went into research mode as he is prone to do and decided he wanted to try it. The dudes teach people how to do it and organize the trip you just have to pay for it. Scott left on Monday and has been with the group in China since. Our communication has been limited as China is 14 hours ahead and the internet is spotty. He downloaded wechat that is an app that basically sends text through the internet and you can also make phone calls with it as well. Scott would call for a few minutes at the craziest time of my night: dinner, dishes, homework, reading, clean up messes, bedtime but we would chat for a bit. It will be interesting to hear all about his adventures and how/if this new venture will work out. I certainly hope it does of course as does he.

I've survived the week really well actually. It helps a lot that my "baby" is almost three. I'm not nearly as swamped as I've felt in the past with all the little chillins. It's been especially pretty easy since Gabby and Corbin are in school all day and Piper and Ryan are easy. Like I mentioned above the night was my craziest time but it wasn't too bad. I'm ready for Scott to be home though that's for sure.

I decided to try for the third time to potty train Ryan. I've been putting it off forever because I've already failed twice and because potty training is the devil. I was running out of diapers and just decided to suck it up and do it rather than buy more. I started yesterday. He's doing pretty good. We'll see how it goes...

Here's some more pictures from our Utah trip. 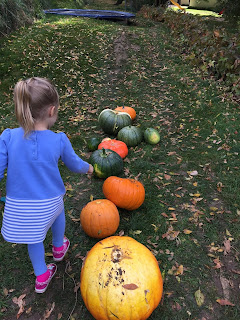 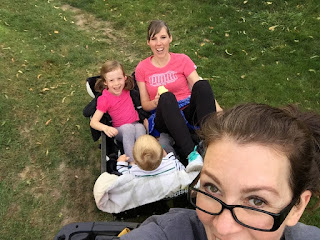 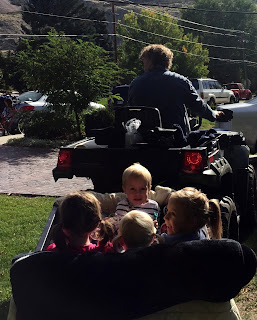 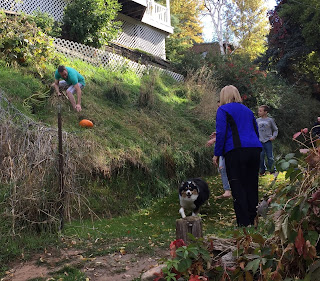 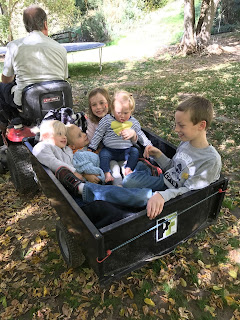 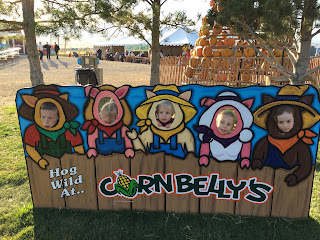 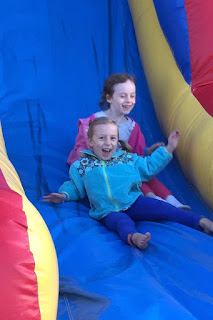 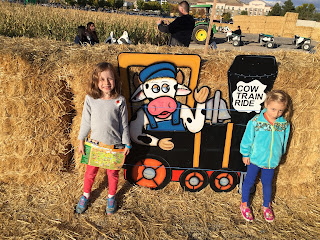 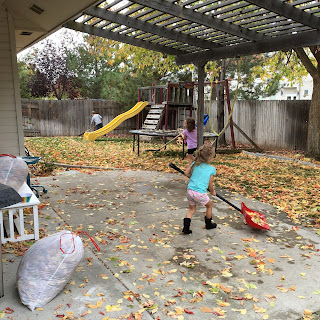 Posted by Mitzi Cannon at 12:02 PM No comments:

Every year the first week in October the teachers have in service or something so we like to go to Utah during the break. We usually try to celebrate our Anniversary at the same time since it's usually during that break as well. We didn't do anything for our Anniversary this year because we counted that as our trip to Seattle in August.

We pulled the kids out of school early on Wednesday and drove down. The kids seemed to be EXTRA excited to got to Nana and Papa's and were more hyper than usual on the drive down. That drives seems to last forever. We arrived and were met with yummy dinner and then presents and cake for Ryan and Hannah's early birthday celebrations.

On Thursday the kids hung around and played at the house. Scott and I went over and visited with Amanda at her house for awhile and then Scott and I went and got some lunch together. That evening we went to Corn Belly's at Thanksgiving Point with the kids and Carole and her kids and Nana. After Corn Belly's we came home and put the kids to bed and went and visited with our friends Walker and Liz. I don't think we have hung out with them since Corbin was a baby. It was fun to visit and catch up with them.
On Friday we hung around the house and that evening we went to Lagoon. It was crowded and extra cold this year it felt like. The last two years we've gone and I've gotten nauseous from the rides. This year we had to wait in line forever for each ride so I didn't get nauseous. I guess that was the upside to it being crowded. We mostly watched/helped the kids on their rides for a few hours and then Nana and Papa took the kids home and some of the adults and Corbin stayed until it closed. It was a freezing, crowded good time.

The weather was beautiful while we were down there. On Saturday morning we picked the pumpkins on the hill and then went to lunch at Hires. The Boise Cannons headed home after that. On the drive home the kids barely made a peep. It was wonderful! I think they got really tuckered out at Nana and Papa's house. 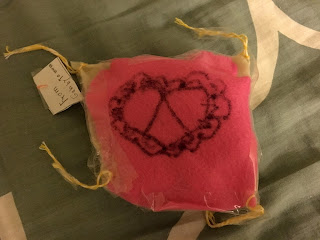 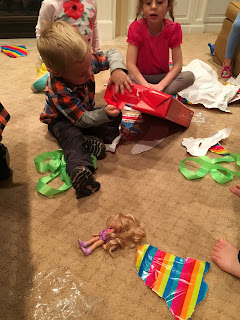 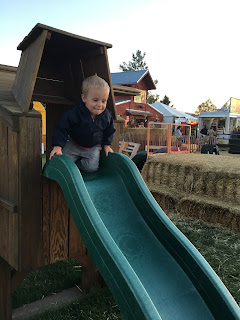 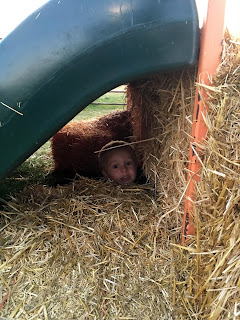 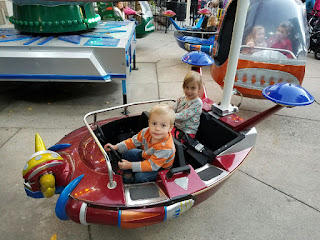 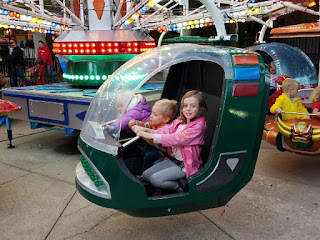