I finished my hallway make over. I LOVE it. On Tuesday after school I decided to take the kids to the dollar movies. We saw Trolls, the kids liked it. It was a fun way to change up the week a little bit. My calligraphy class is a little painful. I am terrible at it and I don't know if I care enough to put time into practicing. It's still fun to get out with my friends though.

On Friday night I went to MAV factor. It's Mountain View's singing competition kind of like American Idol. My niece Brynn made the top 10 again. The talent in that high school is amazing. The singing ability of those kids, wow! Some of them play instruments while they are singing too. It was really good. Brynn played the guitar and sang and her brother Braden accompanied her on the cello. It was a fun night.

I went jogging yesterday and ran three miles straight. I haven't ran that far in YEARS. My brother Gabe is running the Robie Creek 1/2 marathon as is his tradition and I may join him. This race registration fills up in 10 minutes so I'm hoping to buy a spot with someone that drops out. Either way I will half heartily be training for it.

I finally got my first class booked tomorrow morning at 5:00 am. Woo. Early. I have another one scheduled for 5:00 am Tuesday morning as well. Hopefully I will start getting booked. My sister in law Rachel said last month was really slow for her because there are lots of celebrations in China in February so kids weren't doing as much tutoring. We will see how this week goes. Doing lesson prep today. Wish me luck! 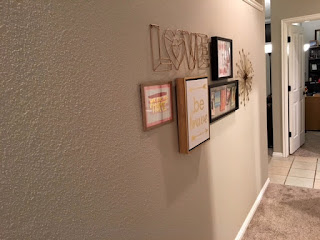 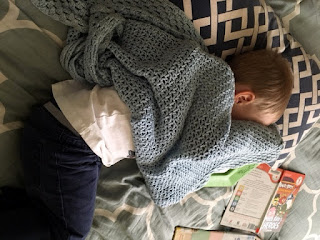 Posted by Mitzi Cannon at 10:36 AM No comments:

It was Gabby's birthday on Monday. We already did most of her celebrating over the weekend. We had a special breakfast and dinner for her and went and got ice cream cones after dinner. It has been warming up. I took the two littles to the park one day and walked laps while they played. It was good for everyone!

I put my availability up for VIP kid and so far haven't had anyone sign up. I've heard it's always slow for new teachers and my sister in law who works for them also said it's been super slow for her lately as well. I'm not really planing on getting booked this coming week. If I don't get booked I will set my schedule an hour earlier next week and see if that helps.

I've been working on redecorating my hallway. We have been spending a little bit of money with our tax return since we have basically spent next to nothing for the last 6 months, that can make a person a little crazy town. I hope it turns out! 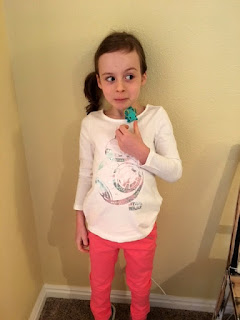 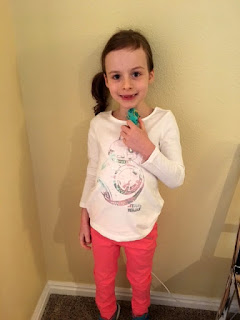 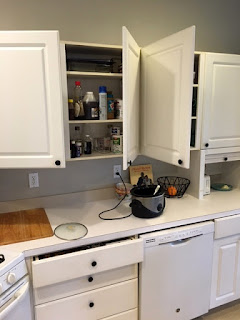 Posted by Mitzi Cannon at 7:20 PM No comments:

First off I was wrong about getting the job last week. Ha. I just made it past the initial stage in the process. On Monday I spent most of the day getting documents ready and turned in what I thought I had to get done (which turns out didn't need to be done yet). I scheduled my first mock class for Wednesday and spent a lot of my time prepping for it. The mock class did not go very well (even as stated by my Chinese consultant, Ha). For one thing I had tech problems and my sound wasn't working for my headset so I had to switch computers and reset everything up. In the confusion a lot of the props I had prepared were at the wrong desk. Oh well! At one point my teaching background fell on my head. Zoinks! Luckily my teacher assessor was SUPER nice and pretty chill so that helped a lot. I actually got a lot of helpful tips from her and felt much more prepared for the next mock class.  I couldn't decide if I should just cram and get it done quickly so I could able to enjoy the weekend with the Cannons more or not. I decided I would rather have more time to prepare. Unfortunately that cut into some Cannon time but that's okay. The extra time really paid off. I got a job offer for real this time. I still have to wrap some things up before I really know when I will start working or how my schedule will turn out. I was so exhausted when I was done. The amount of hours I put into it was ridiculous! I needed it though, hopefully I will get the swing of things and not have to prepare NEARLY as much in the future.

Piper had Kinder Chicks on Friday morning (a program to welcome kindergartners at the school). She had a lot of fun and is very excited to go to school next year.

Nana, Papa, Colie, Rustin, Mandy, and Attie came up for the weekend to celebrate Gabby's birthday. They got here Friday night. On Saturday morning they all went swimming (I stayed home prepping). Jeff and Janet got the very bad news that their house was broken into Friday night. It was a quick smash and grab and they stole jewelry (family heirlooms) which were sentimental to Janet. It is such a violation. Ugh. Very stressful to be away at a time like that. Luckily Clark was able to help. I hope they can sort some of that out when they get home. UGH!

We later went to lunch at Big Juds (yum) and partied at PoJos. Later that night people watched Star Trek with Scott and Mandy gave me a foot zone, it was delightful. Today Scott took the kids to the hotel for a few hours while I prepped some more and later everyone (minus Mandy, Papa, and Attie) came over and we had lunch and quite a few visits from the Valentine Rascal. It was fun to see everyone, we are so glad they could come up and we hope that they can sort out the terrible breaking in business. 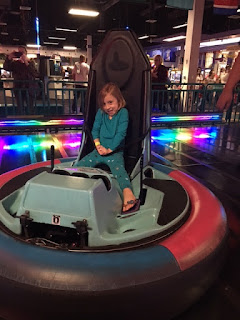 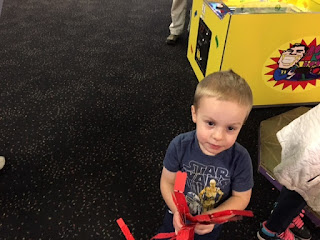 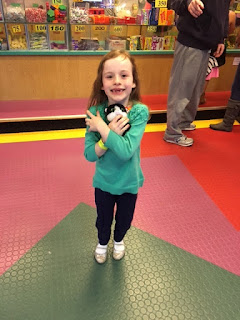 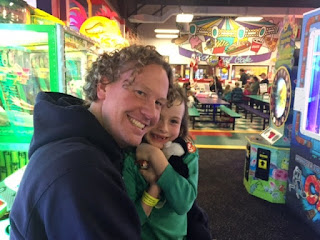 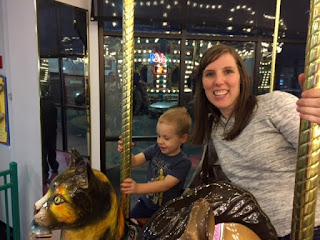 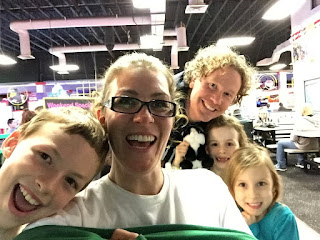 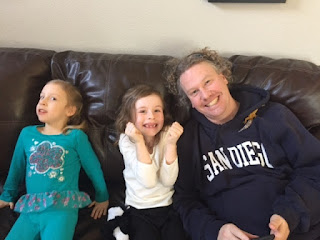 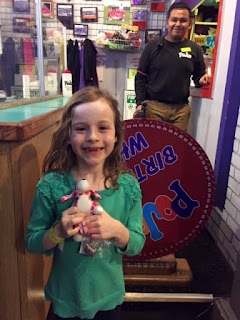 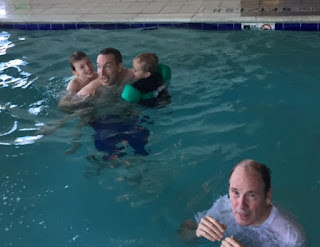 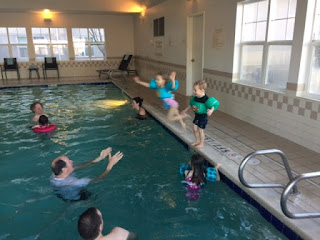 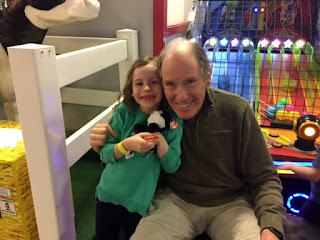 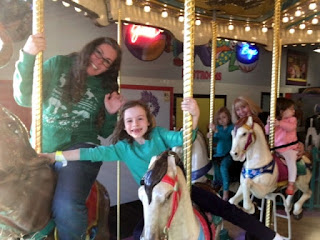 Posted by Mitzi Cannon at 6:41 PM No comments:

I've been passively looking for a job for a little while now and last weekend I learned that my sister in law Rachel was teaching ESL online. My friend had told me about it but I knew the hours weren't good and I wasn't interested at the time. At this point I'm more ready to deal with the bad hours to help ease the financial burden. I've been working on that process last week and will continue to do be very busy with it this week. I had my initial interview last night and I was pretty nervous. I haven't worked in 10 years and I certainly haven't had to deal with any kind of job interview in a LONG time. I watched youtube videos for a long time for tips and tricks and practiced my lesson a bunch of times. Rachel told me the job was pretty much a guarantee so I wasn't worried so much about that as I was about the pay offer. They base your pay on that one interview and I really wanted to get the top pay so I feel like I over prepared for it. I was disappointed that I didn't get the highest pay rate and felt that her assessment was a bit unfair and arbitrary but alas the pay is still good and I think the job will be good. I was disappointed because I had put so much into it but that's okay. Nothing that a few tears and a trip for ice cream can't help fix. It also helps to keep things in mind from a book called Feeling Good. The author points out that your work is not your worth which is really good and has been especially helpful for Scott. Another thing he tries to combat is perfectionism. He has as section called Dare to be Average! So I try to keep that in mind when I am being a little ridiculous about things. Dare to be Average! Yes!

Other than that things are same old same old. I think the sun should really think about coming out one of these days. Winter time can be hard. We learned tons of letters at my calligraphy class last week and I am terrible at it. Dare to be Average! Ha. I don't know how much time I will be able to put into practicing since I am trying to figure out a new job but we will see. I had my book club last week as well so that was good. Nothing much new with the kids. Gabby has been counting down the days for her birthday for awhile and some Cannons will be visiting soon so the kids are in stitches about that!

I forgot to add about Ryan's potty training progress, I have not thrown in the towel and he is indeed still making progress. This has been slow going for sure. He has the pee pretty much mastered I think (during the day) and a couple of days ago for the first time ever he came to me and told me he needed to go poo and he went on the potty. That was amazing!!! Slowly but surely. 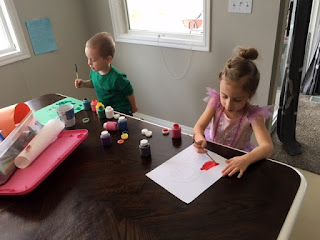 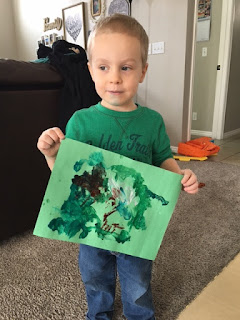 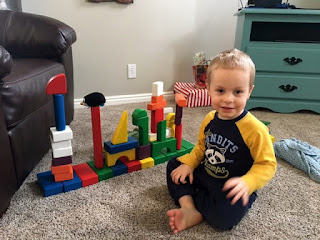 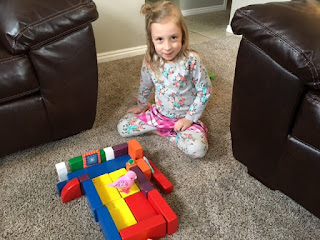 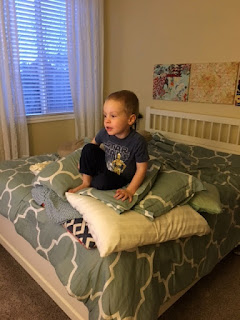 Posted by Mitzi Cannon at 9:59 AM No comments: