The main events from last week were swimming lessons! I decided to try doing them through the Meridian public pool because my regular lady raises her prices every year AND I have to bring my kids back and forth for the different swim sessions. At the Meridian pool all of my kids can go at the same time and the price was much better. Winning! It's been pretty good. Corbin is a master swimmer. Gabby is starting to learn to swim a little bit by herself. Piper is doing pretty good, in her words when I told her good job she said, "I almost drownded three times." Ryan is doing great. (I think swim lessons for 3 year olds is a little bit of a waste of money but I wasn't going to torture him again this year by not letting him in on the fun). He's loving it so that's great.

On Monday I went with some of my ward friends to Roaring Springs. Gabby and Corbin had free passes from the school. We had a blast. Gabby was big enough and brave enough to go on most of the rides. We had a great time. I left Piper and Ryan home with Scott. Just the big kids this time.

One of my friends was in Boise last week from New Mexico. We hung out a few times and it was good to see her again.

Other than that through different circumstances several of my friends from my old ward needed help with cleaning, packing and painting. My one friend is moving into their new house this week. In the last two weeks they have been trying to paint and do all the floors. I went to help sand one night and they are repainting everything in the house. ALL of the baseboards, doors, window frames EVERYTHING is oak. They have been working a ton and have had a lot of people help. When I came back over yesterday to paint a lot had gotten done since I last saw it. They still have a lot left! I will be excited to see it when it's all done. Somehow they are in the middle of the city and are on a 5 acre lot. They have cows and chickens and a garden. Reminds me of being in Arco. Love it.

Two Saturdays ago Gabby wanted to do a yard sale with some of her toys. She set it all up and was out there for a couple of hours and only our next door neighbor came and bought a 25 cent stuffed animal for a dollar. I told Gabby I would make some cookies and we could try again. I made cookies on Friday and went to the bank to get some change. On Saturday morning five minutes after she set her stuff up her first customer came and bought ALL of her cookies and a few toys. He was really generous and kept telling Gabby to be business minded. I hurried and ran in the house and bagged up the cookies we were going to eat so I could sell them. The next customer came and wanted to $5 worth of cookies (which we didn't even have that much left). We sold out again. I had to take down our signs and we closed up shop. Gabby made $15 in just a few minutes. It was so fun for her. We will have to do that again! (I should have taken a picture).

We went up towards McCall today and had a picnic and played in the river. It was great family time! 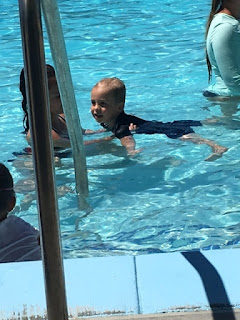 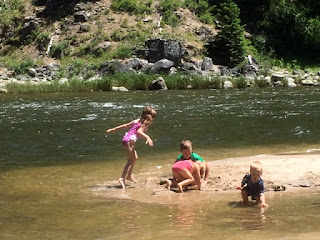 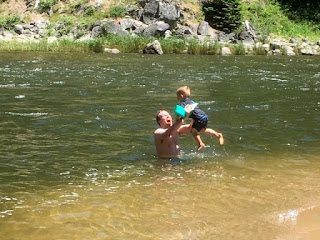 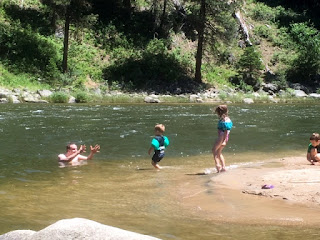 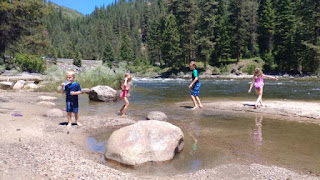 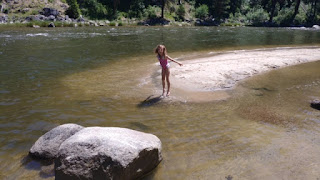 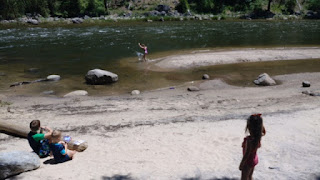 Posted by Mitzi Cannon at 8:05 PM No comments:

My friend Kate (who lives in NYC and I haven't seen in 9 years) was coming to Rigby to visit her in-laws and wanted to see if by chance I would want to come visit. I told her that I had a sister in Rigby so we could probably swing it. Arrangements were made and Tuesday morning I headed out with the littles to Rigby. About 20 miles down the road I felt like I was getting harassed by this dude in a big rig truck. I tried to get rid of him but he wasn't relenting. I was actually starting to wonder if I was going to have to call the cops or something. I finally looked over and they were trying to signal me that my tire was flat. Oy! So I pulled over and my tire wasn't flat but it was really low. I was immediately mad at Scott for not checking the tires and then I was immediately mad at myself for not checking the tires. A part of me was ready to just turn around and head home. This man was super nice and followed me to the next gas station and put air in my tires and then followed me to Les Schwab in Mountain Home where I ended up having to get two new front new tires (we just had to buy 4 new tires on the Avalon last week, gotta love timing).. With an added 2 hours onto our trip we continued for the remainder 3/4ths of the drive. Good times! Gabby would say, "if we didn't have to stop we would have been there already." Don't I know it. The kids did pretty good especially considering we added a lot of extra time on an already long trip.

My kids love coming to visit their cousins in Rigby. My sister has a big house and a big yard and the kids have tons of fun together. All of my kids get along and have fun with Trisha's kids, (even McCoy and Ryan didn't do too bad this time).

On Wednesday morning I went to breakfast with Kate. I picked her up and on the way to breakfast I had two engine car lights turn on. It was right before my sister's exit so I didn't risk it and we went and switched cars. Later that night a guy in her ward checked it out and found that a plug had come undone on the car and had let out a ton of antifreeze. He said if I would have driven it much farther I would have burned up my engine. Oy again! He refilled it and then we had to drive it and let it cool and fill it again and drive it and let it cool and fill it again. In the morning the fluid was low again and I filled and drove it around for a bit. I stopped in Pocatello and had to add more fluid again! After that I kept stopping every 60 miles and it was finally full and didn't need anymore after that! Car problems, no fun!

Anyway back to Kate, breakfast was great and it was so fun to catch up with her. As soon as she got in the car it was like we had just hung out yesterday not 9 years ago. I love friendships like that! The kids just played all day at the house. That night we build a fire and had s'mores. We headed home in the morning. It was a fun little quick trip (minus all of the car drama).

On Saturday we had a party with some friends and had tacos and karaoke, So fun and the tacos were DELISH! Scott  loves karaoke so much. It was great fun.

Happy Father's Day to all the dads out there. We didn't do anything today (just like Scott likes, ha). I made him a special breakfast, dinner, and dessert. That's all!

Ryan quote: "Oh no, that's a mess man." Haha, it was hilarious. I wish you could have heard how he said it, so good! 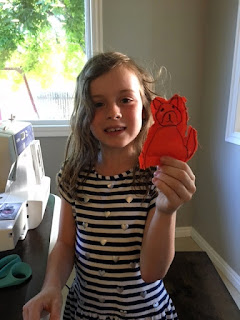 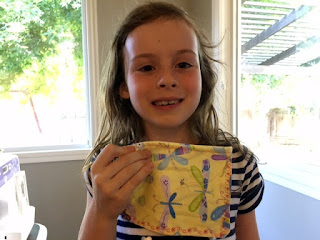 Posted by Mitzi Cannon at 6:02 PM No comments:

We've survived the first week of summer.  Survival is based on the bar being set very low. I was going to try to set up some no electronic time and I didn't make it one day. Monday morning when the I was supposed to turn off electronics they were all playing together. I didn't see the point when it was bonding time. I thought about the times when I try to restrict electronic time and how it stresses me out and I end up yelling at the kids all the time (not a better alternative in my opinion). So like I said, low bar. We made sure to have plenty of adventures aside from the electronics. We picked strawberries, washed the cars, went swimming, the girls had dance camp, picnics in the park, reading, games, yard sales, jobs, white water park, and lots of electronics.

This week we will be visiting cousins. The kids will love that!

So far it hasn't been too bad working in the summer (one week, ha). I don't think I will be able to get as many hours in with summer happenings but I'll try my best. 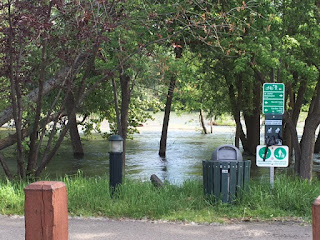 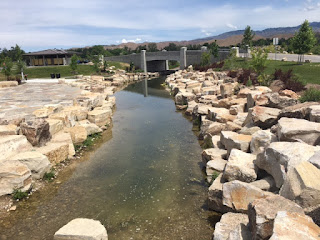 Posted by Mitzi Cannon at 5:56 PM No comments:

Last week was a very busy week. Monday was Memorial Day. I decided we should do a day trip and a friend mentioned Malad Gorge and I thought it would be perfect. It is right next to the freeway headed towards Salt Lake about 1 1/2 hours from Boise. It's fun because our kids are getting old enough that we can do things like this and it will be fun and not painful and somewhat pointless. I went to the store and bought picnic foods in the morning and we headed out after breakfast, We got there and checked out the gorge and then went to the picnic area and had lunch. After lunch we found Thousand Springs park and checked that out as well. Then we headed home. It was fun and the kids were only a little annoying. Ha.

On Tuesday I went to the school to help out all morning for field day. Wednesday night was the funeral of my friend's son. He died suddenly of a brain aneurysm. So awful. They held a service at the park. The family each talked about Ben and then after everyone had ice cream. I thought it was very well done. They wanted to celebrate Ben's life and make it a party like he would have wanted. Oh man, it's heartbreaking though.

On Thursday I hosted my book club. It's always a fun time getting together with my book club friends. On Friday we had an end of the year picnic with the kids and then brought them home for the summer! That night we got a sitter and got together with friends and watched a scary movie. Fun times. 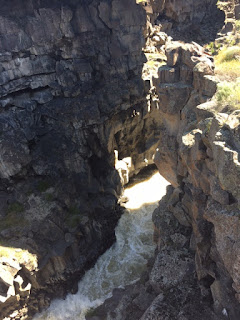 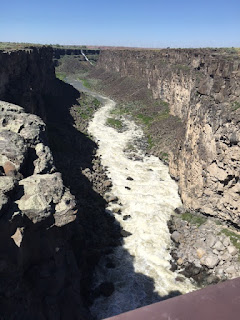 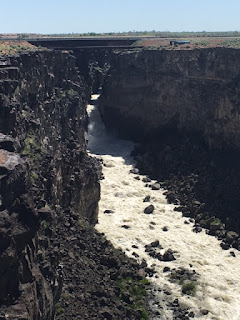 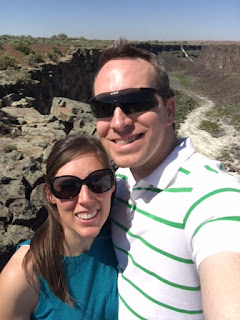 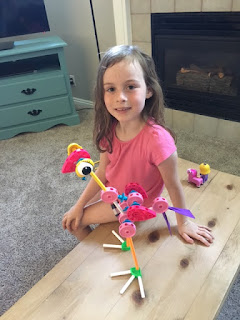 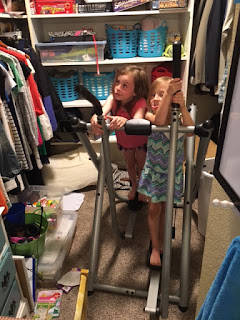 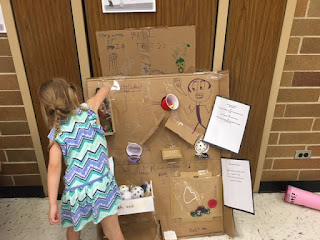 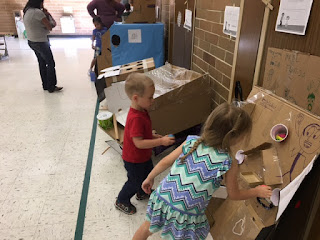 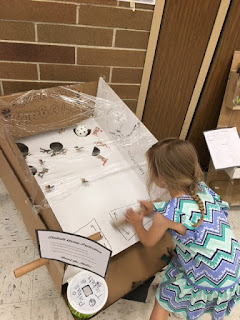 Posted by Mitzi Cannon at 7:19 PM No comments: