The past several times I've visited Jenny I've gone for my birthday and visited her at her house in Colorado Springs. We decided that we should just go on a trip instead. We were trying to pick a spot and Vegas seemed perfect, warm weather and lots to do. We decided we should go to San Diego next time. On Monday after we got our car rental we went to the strip and walked around waiting to check into our hotel. My brother let us stay in his timeshare. The hotel had a lazy river and we were in love with it. We got in almost immediately after checking into the hotel and the water was warm and it was amazing. We had dinner at In-N-Out that night. On Tuesday we went to the Red Rock Canyon in the morning. It's a 13 mile loop and it was really beautiful. We got lunch and then hung around the pool for several hours before leaving to spend the evening on the strip. We ate dinner at the Shake Shack and then we headed over to our Cirque de Soleil show. It was really good. Afterwards we got shakes, souvenirs, and checked out the water show at the Ballagio. We were wrong about the times on the shuttle back to the hotel and ended up hanging out in the back of Excalibur for almost an hour.

On Wednesday we hung out at the pool as long as we could until we had to check out. The rest of the day we felt like we were just waiting until it was time to go. We had lunch at Banditos. It was good. We did a little shopping but then felt tired enough that we just hung out on a bench until it was time to return our car and go to the airport. We got to the airport way too early and ended up waiting another hour together until we had to separate and go through security. It was just a long day and I didn't get home until 12:30 that night. I had to get up to teach my English classes and go to my sub job (which was a half day luckily). The trip was tons of fun and I love hanging out with Jenny. It doesn't matter how much time passes we still can get right back together and we are totally at home and comfortable with each other. It's the best!

Scott ended up driving to Utah overnight with Ryan on Thursday night to be a part of Clark's surprise 40th birthday party. It looked pretty epic from the video. Clark and Steve sang the Le Miserable' song "Can you Hear the People Sing" at the karaoke bar and all of his friends joined in on the chorus.

We didn't do much this weekend. I'm working on my porch. I sewed some new pillow covers and I'm going to paint my chairs. I'll post pics next week. 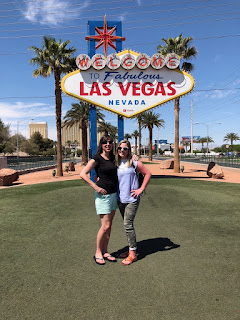 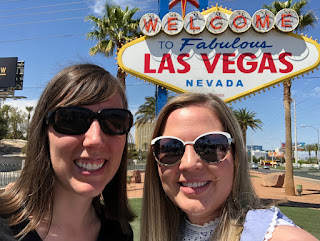 Scott had another sleep study last week. This time they did the whole study and he was there for nearly 24 hours. He hasn't officially gotten his results yet but the doctor called Scott and talked to him about it. It doesn't look like he has narcolepsy but he definitely has hypersomnia and mild sleep apnea. I think it's mostly a matter of figuring out medication to deal with his symptoms and getting insurance to cover it.

I got offered the job to coach both 8th grade and 7th grade basketball next year. I'm excited. I'm getting burned out with subbing and I'm excited for summer vacation. On Friday I subbed at a high school and it turned out to be for study hall. It was the longest day ever! I couldn't get half of the kids to work on anything and the class periods are 1 1/2 hours long. Painful for all. I was super glad for that day to end.

I'm leaving for Vegas for a couple of days early tomorrow morning. I'm meeting my old roommate Jenny. I'm excited! I'm trying to get packed and ready. I'm hoping I remember everything.

Last Sunday a cute little kitten came into our yard. He stayed all day. He was back the next morning. The kids continued to play with him like crazy. He had a collar and we called the owners but Scott waited until the kids got home from school so they could say good-bye. It was so fun watching the kids play with the cat that it almost made me want to get one, ALMOST but not really in a million years. Another adorable lost kitten is welcome to come play for a couple of days anytime.

It was the end of the basketball season last week. We had games on Monday, Tuesday and Thursday. We won our games on Monday and Tuesday and lost our last game. Darn! Every game we lost though my girls played hard the whole time and didn't give up which was awesome. It was really fun to see the amount of progress they made in such a short time. It was a blast and I will miss it. On Wednesday we had a pizza party after practice. Scott came with our kids and brought the pizzas.

I thought I might start coaching track because they were wanting more help but then they realized they were 20 kids shy of having another paid coach so I turned that down. I can't justify that amount of time for free. I think I am going to help out once a week just to get to know the head coach and maybe get my foot in the door for next year.

We didn't really do anything over the weekend. I am continuing to get some spring cleaning done. Yesterday I sprayed off the house and washed the windows inside and out. Kids seem to be drawn to clean windows like a moth to a flame, but the windows looked amazing for a few minutes at least. 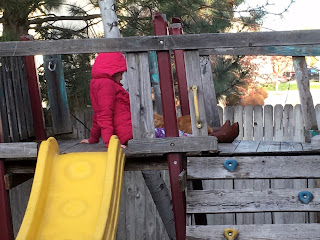 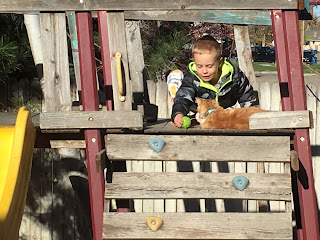 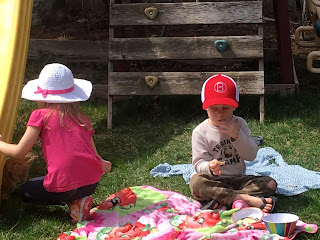 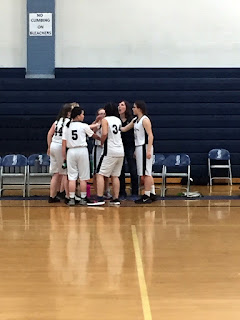 Posted by Mitzi Cannon at 4:00 PM No comments:

Well things are mostly same old same old. I have really been enjoying my time coaching. It was a little stressful at the beginning but now it's just fun. I feel like we've kind of gotten a groove as a team and it's just been a lot of fun. My girls won both of their games last week. I could tell we were playing teams that were not very good but I can also see a huge improvement in my girls as well. This week is the last week of the season. We have three games. I'll be excited to see how they do.

The weather has been gross all weekend. I was hoping to get some yard work done but it forced me to do some work in the house. I am definitely in spring cleaning mode. I want everything cleaned up and organized. I got rid of a bunch of junk from my closet and cleaned and organized it. I did the same thing with my kids' room but it's not great. Having four kids in one room there is only so much I can do. It looks pretty good now. I hope I can keep the momentum going and get everything cleaned and de-junked!

We went and watched a movie with our friends on Friday night and we actually went to the movie theater on Saturday night. We watched A Quite Place. I love a good scary movie. A cat came in our yard today. That has provided a lot of entertainment. We are having an Easter dinner with a group of our friends this evening, that should be a good time. 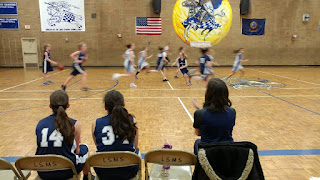 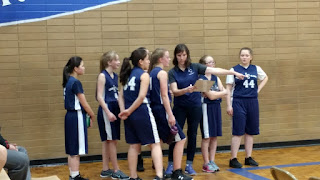 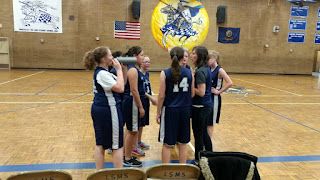 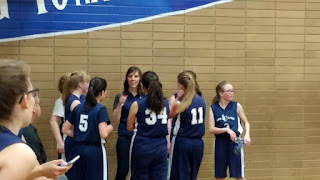 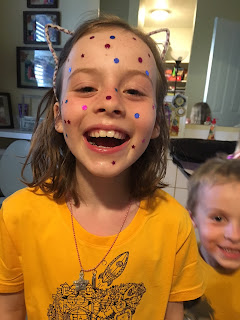 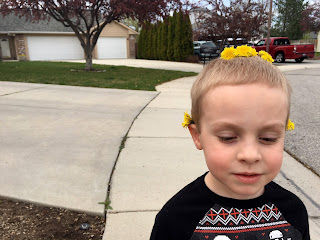 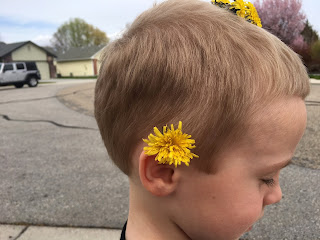 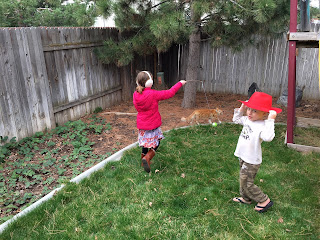 We had a great Spring Break. Before we headed down to Utah the highlights were going to the movie Ferdinand in the dollar theater which was packed, decorating Easter eggs, and celebrating Easter morning before we headed down to Utah. I also managed to gird up my loins enough to make three batches of strawberry jam. We headed down to Utah late Wednesday morning. We drove straight to Carole's house in Lehi where we dropped the kids off for a sleep over and we went with the adults to dinner and to a Harry Potter mystery escape room. I was of no use as I am terrible at puzzles and riddles. It was fun to see the Cannons nerd out and see the cool room. After that we got ice cream at Leatherbys. That night Scott and I joined Clark and his friends for karaoke. The best part for me was when Scott got up on the stage looking very nerdy in his sea foam polo shirt with khaki shorts. People were looking around and saying, "Utah dad?" Then Scott went all out singing a Rage Against the Machine song and surprised everyone. It was so funny.

On Thursday Scott and I escaped for an over-nighter in Heber. We haven't done that in a LONG time, too long. We were planning on going on a cruise in February but we decided it was too much money for us right now. We thought we should try to get away during Spring Break and Scott's family was gracious enough to watch our kids. We stopped in Park City and did a little shopping on the way to Heber. I actually found a few things to buy, yeah! I love Heber it is so beautiful and quaint. We stayed at the Zermatt again and we loved it even more the second time. It is such a nice, beautiful hotel. The pool is really nice and actually warm. The tub in the room was ginormous it could actually fit Scott with ease. We enjoyed our time together and it wasn't nearly long enough but it was great still.

On Saturday Nana made a lunch for everyone and then the kids went on a major Easter egg hunt. Later that night we enjoyed a delicious Easter dinner. By Saturday night everyone had gone their separate ways and only Jeff, Janet, and I were left to play a game of Rage, which Janet not surprisingly won.

On Sunday we got packed up and headed home. We got the distressing news that baby Parker had fallen in his bath chair in the tub and was headed to the ambulance Sunday morning. I still don't know the details but he is okay. They were planning on observing him for the next 8 hours so hopefully he is home now. That is so scary! I'm so glad everything is okay.

Now we are home. I still have lots of clothes to unpack and laundry to do. Back to reality. 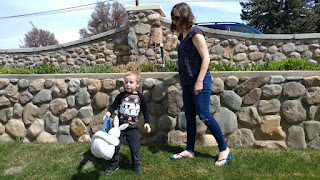 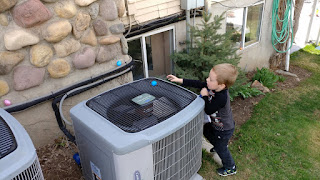 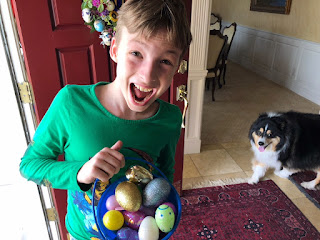 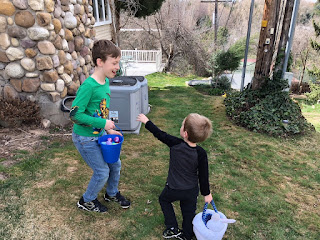 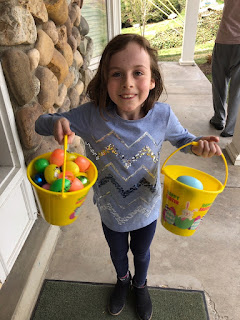 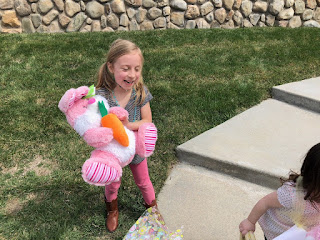 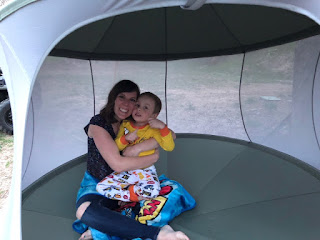