We picked up the last school packet last Tuesday! Summerwind had the whole staff there to greet the kids from the car. We decorated our car for the occasion to wave and say a final goodbye to the school year. Peace out! The kids have school work technically through this Tuesday but we may just bag it next week. I have to go into Centennial on Monday and Tuesday for a half work day and then my summer officially begins. I can't wait! This will be my first summer in 3 years that I don't have to get up super early to teach and my first summer getting paid while not working. Woot. I keep looking for teaching jobs but there's not a lot out there. I think some districts are having a hiring freeze because of Covid and there's been a big state budget cut so it's not the best time. Also I really don't know if I want to get back into teaching next fall when it will no doubt not be normal. Lots of unknowns right now.

On Wednesday my niece had an online bridal shower. My sister in law hosted it. She had a lot of clever game ideas. On Thursday my friend and her family came over for dinner. They are in town while they are in transition to move. They've been in Tennessee for the last 3 years while her husband has been getting his PhD. Now they will be moving to Texas for a job he got down there. We had a great visit with them and our kids had a fun time with each other. My book club was meeting at the same time in the parking lot behind my house and I was able to go out and meet with them still after the McFarlands left. We went until midnight! I love those ladies so much.

I started cleaning out the garage yesterday! It has been bugging me! Scott helped me finish today. It looks SO much better, I still want to figure out a better solution for the bikes. Maybe hanging from the ceiling? Bikes are a pain. We took a ton of stuff to the dump and donation center. WOOT!

Right now I'm mulling over my plan for the summer with the kids. I'm trying to figure out their jobs, reading, and outside time schedule. I think I've figured out some things that will be manageable for our family. We will see. Fingers crossed!

Posted by Mitzi Cannon at 3:47 PM No comments:

Alright as things continue to open up I guess I won't continue to title my blog by weeks stuck in quarantine. The weather was cold and rainy all week. We didn't end up going outside at all, that was not my favorite. Finishing up my laundry room did feel really good in the end! I organized and cleaned it out when I put stuff back in and also organized some of my cupboards in my kitchen. I love when things are cleaned and organized.

We decided to go with the Millers to their cabin in Cascade for Memorial Day Weekend. Cabin "camping" is my favorite! We have had a great time. Lots of hot tubing, game playing, and food eating. We will head back into town in the morning.

This coming week is the last week of home school packets. I can't wait to be done with those. Things continue to feel crazy, polarizing, and confusing with covid-19. I am definitely loosening up a bit but also trying to continue to be cautious. I'm not looking forward to summer vacation much with pools and parks being closed. I think? Time will tell. 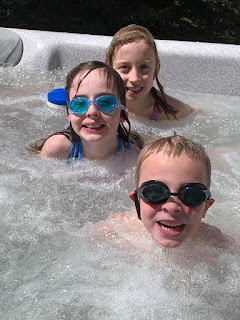 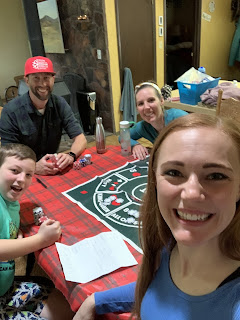 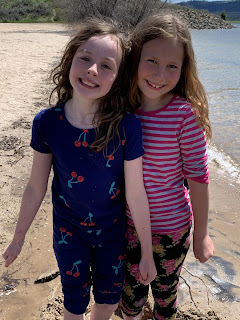 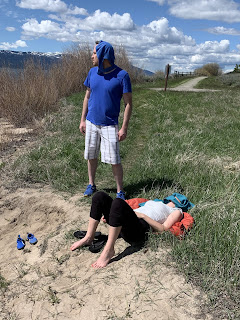 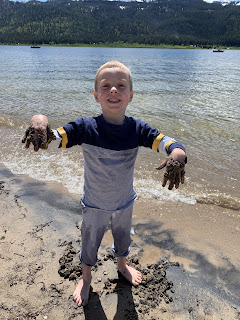 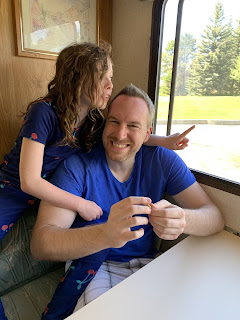 Posted by Mitzi Cannon at 6:26 PM No comments:

Things are same old same old. We started a chain link countdown to the end of school because we are all over it...especially Piper! I've been slashing and dashing some of her assignments. No sense in damaging relationships and ruining our lives. A little flexibility goes a long way.

Scott's plan to track the sun every hour was dashed on his day off and on Saturday due to clouds. He is a little obsessed with gardening right now. No complaints from me I love any extra plants and attention to the yard.

Piper is not one to be adventurous or like to go outside so getting her to ride her bike has been a struggle. Unfortunately after I finally taught her how to ride her bike she had one fun time where she actually rode her bike up and down the street for a long time and then she crashed. She has not wanted to give it a try since. I've had to force  her to get out there and take one lap here and there. My favorite was when she said, "Riding bikes is going to ruin my life." It was amazing! Ha.

I was feeling blah on Saturday so I had the brilliant idea to finally paint my laundry room to boost my spirits. You know how sometimes exercise or projects energize you...and you know how sometimes they don't...well this did NOT energize me. Immediately I realized that I had made a huge tiny mistake. Oh well! Good news is I'm almost done and it will be done which will be nice, bad news is it has been painful...literally! I've taped my hands up today so I could finish without blisters forming that are trying so hard to form. Can't wait to be done with it!

I'm not even sure if I should say we are still in quarantine with stores opening back up. School is canceled for the rest of the school year and parks are still shut down. Who knows? At first it felt like this was kind of a bonding human experience where we are all in it together and now it's super charged and polarized. I'm over it! I'm just trying to avoid Facebook a little bit and trying to use caution but I admit I've loosened the reigns quite a bit this last week. I ran several errands, usually I wore a mask but sometimes not AND we had a bridal shower for my friend and that was NOT socially distanced. By the end we grouped up for a photo and hugged good bye. I think everyone is just over the social isolation. We've continued to hang with the Millers thank goodness. Having one family really has been SO nice.

Home school and work has been mostly fine. Piper has the hardest time. She is a perfectionist and she gets in her head and makes things harder than it needs to be. Just do it! But the second grade work seems a bit over the top so I've been letting her cut corners here and there.

I focused on Ryan this last week trying to see if he could wake up dry. He woke up dry 3 mornings so that's good. I'm going to continue to see if we can't help him out and get that boy out of pull ups.

It was Scott's birthday on Monday. I loaded up the kids and we dropped off a present chuck full of work snacks and treats for Scott. That night I made him pork chops and scalloped potatoes. I bought him a toaster oven for his birthday. He's been wanting one forever but was over thinking it so I just went and bought one. I'm not sure it it's the best but it works. I admit I was a skeptic of the toaster oven. It seemed like another kitchen appliance to crowd my counters but I am a fan. I have used it everyday. Scott has been happy as well. Ha.

Today is Mother's Day. Scott is making me stir fry and the kids cleaned my house. I can't want much more than that! Happy Mother's Day to all the wonderful mothers out there. It. Is. Hard. The end! 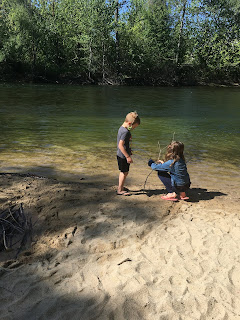 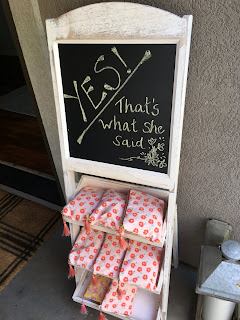 Posted by Mitzi Cannon at 4:58 PM No comments: