I'm so glad we didn't have any plans for Spring Break. I was/am wiped out! I still ended up being busier than I would have liked to be but it was mostly down time which was SO nice! I am loving my new washer and dryer. The weather was cold and terrible most of the week. We stayed home as much as possible and did some indoor activities. It reminded me of a year ago when the schools closed and everything was shut down. We mostly hunkered down this last week. We did some baking, sewing, and dog sitting. Corbin had to do 4 hours of community service for his health class so he and I went and collected garbage for 4 hours. Scott has been doing some gardening. He is replacing some of his fruit trees and trying to start some seeds indoors. We will see how it goes. I have work figured out enough for Monday and Tuesday so I'm feeling good about that. Ha.

Since the Adams' Family got Covid they had to cancel their plans canceling our plans to dog sit. My kids were so sad that we thought of a solution that would help them get a dog fix. We got to watch our friend Jake's dog Evie. She is his baby and boy is she ever! She latched onto me almost immediately and hardly wanted anything to do with the kids. That was not the plan! So I have spent days holding a dog and even sleeping with her if you can believe it! She is a sweet dog but she is needy! She still has been cute and fun for the kids but I wish she would have latched on to one of them! I don't mind holding her when I'm just sitting and working on the computer or watching TV but other times forget about it! Wow, that's a lot of exclamation points! 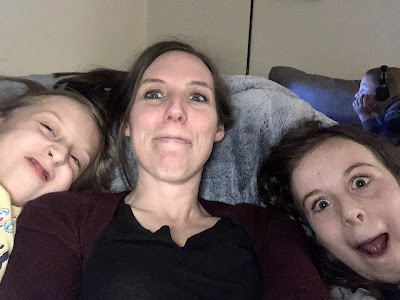 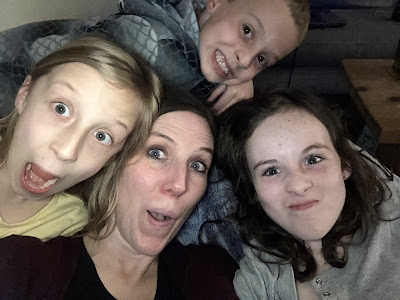 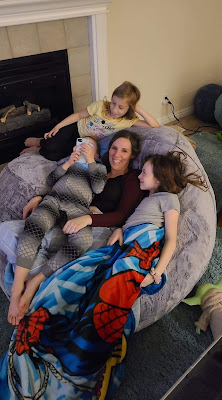 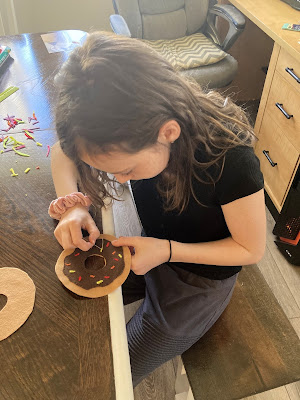 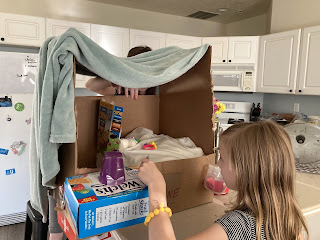 Posted by Mitzi Cannon at 2:06 PM No comments:

It's Spring Break Y'all!

Phew! I made it to Spring Break. I'm not going to lie this school year has been tough! I feel like it's been a marathon and I've had to pace myself every day. I'm nearing the end. I think there are 8 weeks of school after this. I have no idea what I will teach yet. I don't even know what I'm teaching next week. Oy! They posted my test scores and I did indeed pass officially. They gave a break down on how I did on each section and I got perfect or nearly perfect scores in food and nutrition, housing and interior design, and foundations of family consumer education. I did well enough in the other categories except for textiles, fashion and apparel. I only got 4 out of 11 questions right. I'm still kind of in shock with how well I did on that test and it's a huge relief to be done. I'm really glad I took it already and passed because it will be helpful on my resume. I've decided to go ahead and fill out the paper work for applications in case there isn't a job for me at North next year. Right now I'm gathering my letters of recommendation and need to update my resume and all the things. UGH! Talk about burn out. I'm so tired of doing all the things...

For Spring Break I want to do nothing! I want to rest and relax as much as possible. I have some work to do and I want to try to do something fun with the kids. I think we will go to Wahooz one day and we do get to dog sit for another friend this weekend so that will be entertaining for my kids.

I plan to do lots of laundry. Our dryer died again 3 weeks ago and I am so over it! We've gone through so many crappy used washers and dryers. We went and bought a new set at Home Depot but because of Corona Virus everything is on back order. So on top of everything else the last few weeks I've only been able to do minimal laundry and take it to my friend's house to use her dryer. ANNOYING! We got our new set yesterday and they are so nice! Yay! I've never been more excited about doing laundry.

Last night I went with my friend Lisa to watch her daughters dance at state. It was fun. Her girls are crazy good dancers. They got second in every dance and second over all. Curse you Eagle! I wonder if Gabby will do dance in high school. They have to be SO good! It will be interesting. Centennial has a good dance team.

Alright well that's all. I have some relaxing to do. 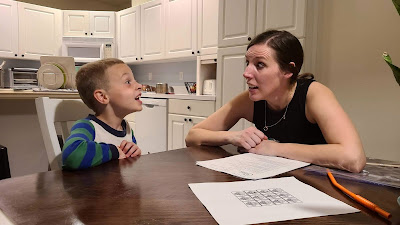 Wow, I made it. I took my test and by some miracle I passed it. All week I've been studying as much as I could stand. I discovered the website study.com last Sunday and I took so many quizzes and practice tests through that site. It had 14 chapters and 145 total, 5 question quizzes over each subsection. Initially I wasn't going to try to take them all but as the test approached I pushed through and did almost all of them in the last two days and retook them until I got a 80% or higher. I also studied through other websites and purchased 4 practice tests. The subject matter was the same but the tests were so different from each other and the things tested on were the same but different. It's really hard to explain. Even with all of that prep when I actually took the real praxis test so many questions were on things I hadn't even seen before. I wasn't sure if I was going to pass it but I did. I still feel like I won't really believe it until I get my official scores but the screen said 172 and I had to get a 153 so I think I'm safe! Directly after the test I didn't feel the relief like I thought I would, I actually cried a little bit because it was so hard. It took my body a long time to feel okay from the stress of it all. I was exhausted and slept on and off for the next 4 hours!

Overall work was okay last week so that was good and I could focus on my test. I have one mean scary high school student who I generally just avoid and let her do her thing. Last week I had to confront her because she was cutting with the knife in a really unsafe way and she was arguing with me over it and we were going back and forth and finally she just gave in. So stressful. She was pretty awful on Friday as well. I'm not quite sure how to handle it yet. I don't have her in person until Wednesday so I'm going to try to not think about it until then. After spring break I will have her everyday so I will have to work something out with her or the rest of the school year will be awful in that class.

This week I have to figure out my lessons for having all of my students back in person after Spring Break. It's going to be so weird! I'm going to be anxious to get that initial week over with and figure out a new normal.

The principal is working on trying to get me to stay on full time at North. I'm a category 1 teacher because I was only hired on for the year so I'm  at the very bottom of the totem pole BUT I'm in a highly specialized area that is hard for principal's to fill so he's trying to use that to negotiate with the District. I think he's scared I'm going to go get a job somewhere else if they don't offer me a job soon which is probably true. I haven't been too worried about it because I was only worrying about passing my test but now I will start worrying about if I need to get applications out there or not. We will see.

We were going to puppysit over Spring break and my kids were so excited but my friend's family were exposed to Covid and now they have to cancel their plans. Gabby cried for a long time. So that is a big bummer.

Scott's 40th birthday is coming up so he is planning a family trip. I've already arranged for my sub. We are going to take a road trip and see the grand canyon among other things...I think. Something to look forward to!

Ryan thinks he has to wear his mask outside. He will even go get a mask to put on before he walks out to the shed. Oy! Such weird times.

My friend Krista had door dash dinner delivered. It was enough food for an army. She is so kind, generous, and thoughtful. 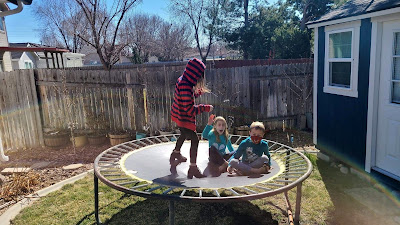 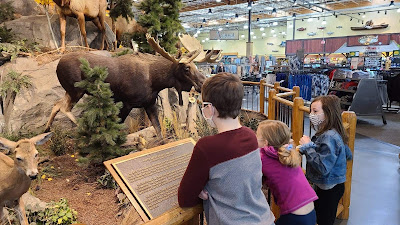 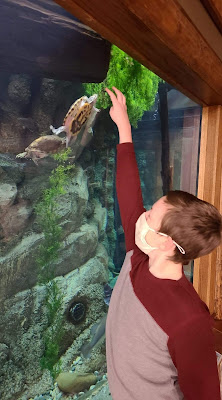 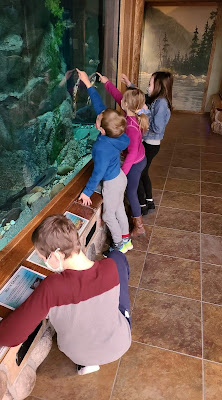 Posted by Mitzi Cannon at 10:00 AM No comments:

Is it Spring Break Yet?

I am so ready for Spring Break! I'm mostly ready for my test to be over...6 more days. I really hope, hope, hope I pass and can be done with it! I studied every day last week for at least an hour. Some days I got up early and other days I did it after school. It's harder for me to get up extra early these days. I can't decide if I will get up early or study after work this week. I studied for 5 hours yesterday and I'm aiming for 4 today.  I'm certain there are easier versions of the test and I'm hoping for an easy version BUT I'm studying like I'll be getting the hardest version. Wish me luck!

I don't even know if I'm studying the right stuff. I think I am but it's so much information and it's hard to know what to focus in on so I'm trying to learn everything which is impossible. I have paid for several study guides and keep taking practice tests and studying info on Quizlet, which has WAY too much info to learn. Ugh. Stick a fork in me.

Roxanne, the teacher I am filling in for is coming back next year BUT she wants to work at Boise High and Boise is bringing back their program in full so hopefully, she gets a job there (that's where she wants to be) and I get to stay at North (that's where I want to be). I know my principal wants me to stay and there are enough kids signed up to keep me and Janet both at North full time BUT I think it all depends on funds and needs and where they need to put teachers and nothing is set yet and the principal can't promise me anything yet. So I will continue to wait, and focus on PASSING my test.

I got my second dose of the moderna shot last Sunday. I suspected it would make me ill so I asked my principal to work from home on Monday (online day) and I'm glad I did. I had chills, body aches, and fatigue. I rested all day and Dayquil helped a lot, by about 7:00 pm I felt pretty back to normal other than my arm hurt REALLY bad. I was able to go to work fine on Tuesday. 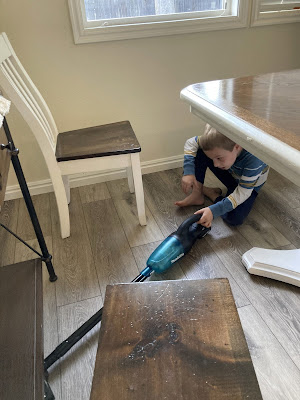 Posted by Mitzi Cannon at 10:21 AM No comments: